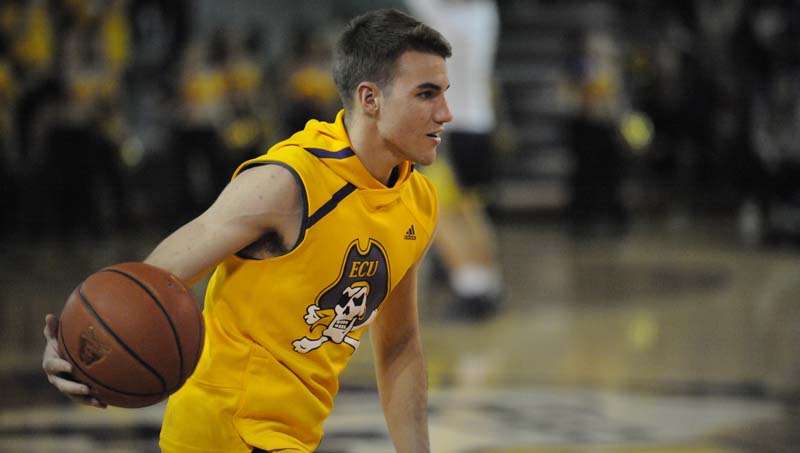 John Whitley gets some shots up before the second half of ECU’s non-conference showdown with UNC-Wilmington.

GREENVILLE — Former Washington stud John Whitley had never even taken a shot in an NCAA basketball game. The sophomore walk-on at East Carolina only had about eight minutes of in-game action under his belt.

That was until Wednesday. ECU led South Florida, 85-45, with 2:46 left to play. Whitley checked into the game to experience some action once the win was essentially sealed.

He crossed the ball over a few times before driving to his right and floating a shot over a defender, putting the exclamation mark on a 90-52 win for the Pirates.

“Felt great. Lot of hours and work have gone into that basket,” Whitley wrote. He also had the assist on ECU’s penultimate basket — a 3-pointer by K.J. Davis.

“And the bench went nuts”
As the crowd is chanting “John John John” @ecupiratehoops @JohnWhitley2 pic.twitter.com/bNBlnboflb

ECU commanded the game from the onset. Junior Kentrell Barkley snapped out of the rut he’s been in. He had six points in the first seven minutes as the Pirates built a 19-3 lead.

Jabari Craig and Dimitri Spasojevic took what they wanted to in the post. They helped ECU notch 22 points in the paint in the first half, and the defense forced a dozen USF turnovers in the first half en route to a 44-18 lead.

ECU cruised from there.

ECU travels to No. 12 Cincinnati on Saturday. Tipoff is slated for 4 p.m.