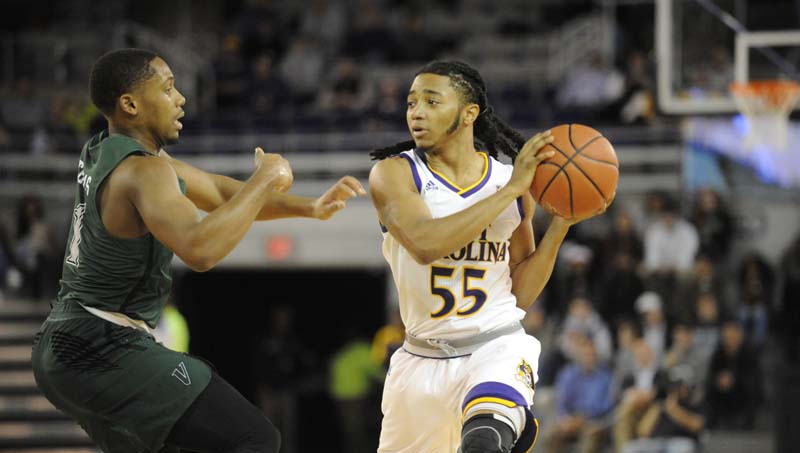 Freshman Shawn Williams looks to pass inside during a game earlier in the season.

GREENVILLE — East Carolina appears to have found something on the hardwood. It split two overtime games last week — beating Memphis and falling to Tulane — thanks to an offensive spark provided by Shawn Williams.

The freshman guard led the Pirates in both outings. He poured in 30 points to lead ECU past the Tigers. Williams has been hot from the perimeter, which is necessary when running a smaller lineup, and has created openings for his teammates.

“Playing small has helped us from an offensive standpoint. We’ve created some mismatches and we’ve been able to attack those,” interim coach Michael Perry said. “Having Shawn Williams on the floor for extended periods of time … he’s contributing even when he’s not necessarily scoring.”

It’s a decision that Perry has phased in since only scoring 49 points in a home loss to Houston back on Jan. 14. Since then, ECU scored 90 in a rout of South Florida and notched at least 60 in road losses to top-tier AAC foes in Cincinnati and Southern Methodist.

The next test comes in a trip to Temple on Wednesday. The Owls had seen their season unravel after a string of four losses to begin conference play. However, they downed Wichita State, 81-79, in overtime last week to get back on track.

ECU’s small-ball lineup has employed a zone defense that has proven effective the last few times out. It will be challenged this time around as Temple has two guards — the 6-foot-4 Shizz Alston Jr. and 6-foot-8 Quinton Rose — and a forward in Obi Enechionyia all averaging double figures.

“They can score the ball from any position,” Perry said. “You’ve got dynamic scorers at every position. You don’t know who’s going to bring it that night. It’s not a team that you can say, ‘I want to pick my poison.’ … That’s a luxury to have. They have multiple guys that can score at a high level.”

On paper, the toughest matchup is going to be Kentrell Barkley inside. At 6-foot-5, Barkley will likely give up more than a few inches, but has shown many times his ability to contain bigger forwards.

The Pirates will be playing in Philadelphia mere hours before the Eagles are set to hold their Super Bowl LII parade. Sports fans throughout the city will already be operating on another level of excitement, which should make for a tough, albeit fun atmosphere.

“I hope they bring their energy to the game so we can beat them while they’re so energized,” Williams said.

B.J. Tyson added: “To be honest, I wanted Philly to win. I didn’t want Tom Brady to get another ring.”

Tipoff is slated for 7 p.m. ECU will then have a week off before heading to Tulane on Valentine’s Day.