Williams being guided by pros 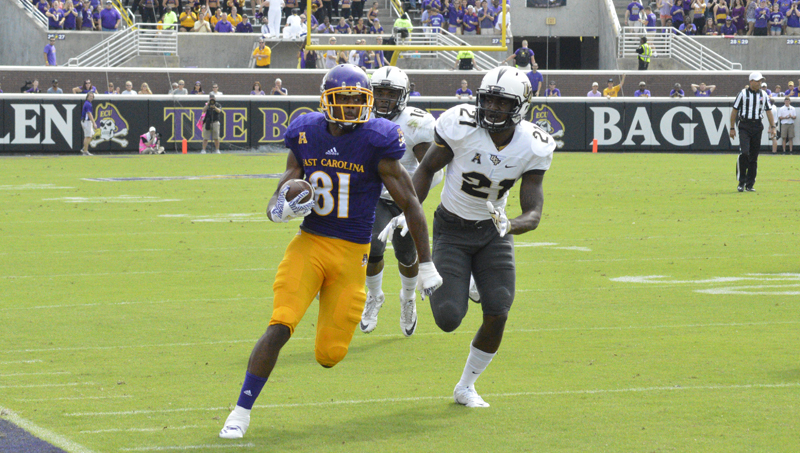 Jimmy Williams makes a catch and darts down the sideline during a 2016 game against Central Florida.

Jimmy Williams has been around football a long time. He’s had a number of different coaches growing up, and even two different leaders during his time at East Carolina.

He knows the drill when it comes to practicing and preparing for a game. But the professional level is a different beast, and he also knows that.

So, while the former Washington standout and Pirate receiver dedicates himself entirely to training for the NFL, Williams has taken advantage of all the resources around him. He’s been training with fellow Pam Pack and ECU product Terrance Copper, who has nearly a decade of NFL experience under his belt.

Copper has been more than a trainer for Williams. He’s been a mentor for what to expect in the professional ranks.

“He’ll tell us all the time the different things you’re going to go through in training camp and just making a team,” Williams said. “There are mindsets to have and things to do to get through it. It’s going to be tough for you.”

Sean Payton is the subject of one of Copper’s stories. Payton was an assistant with Dallas when Copper first broke into the NFL. Payton got his first head-coaching opportunity in New Orleans in 2006. Copper played there from 2006 to 2008.

Payton was tough on Copper.

“They just ripped him every single day he came in,” Williams said. “Once he was leaving Dallas, Sean Payton was one of the first people to call (Copper) because he knew he could take that coaching.

“It’s different things like that that you’ve got to take in. ‘Okay, once I get there, this could be happening to me, too.’ It just gives you a good outlook on what the next step is going to look like.”

Read more: Jimmy Williams is laser focused on making it to the next level

Williams doesn’t want to go into this blind. The training he’s been going through since ECU’s season ended Nov. 25, 2017 at Memphis is as mental as it is physical.

Training camp isn’t the next step, though. Williams must first earn a contract.

That’s the next step. Williams’ training leads to ECU’s pro-timing day on March 29. When it comes to that, Williams has also consulted someone that’s gone through the pro-day process much more recently. Zay Jones impressed at last year’s pro day and in his invitation to the NFL combine. Jones, the most prolific pass catcher in ECU history, eventually became a second-round pick for Buffalo.

“Most of it comes from Zay. I’m much closer to Zay,” Williams said. “When he was going through it, he was calling us all the time, texting us all the time. Zay’s got plenty of stories, as well. Talking to him, I know a lot about everything that’s going to go on with taking that next step.

“I know it’s coming from somebody who works hard all the time. I’m getting great information. Really, I’m taking it in from him.”

When it does, Williams is going to be as ready as anyone.

This story is the second in a series on former Washington and ECU receiver Jimmy Williams. Check each Wednesday issue of the Washington Daily News leading up to pro day on March 29.