ECU races past ODU ahead of LeClair Classic 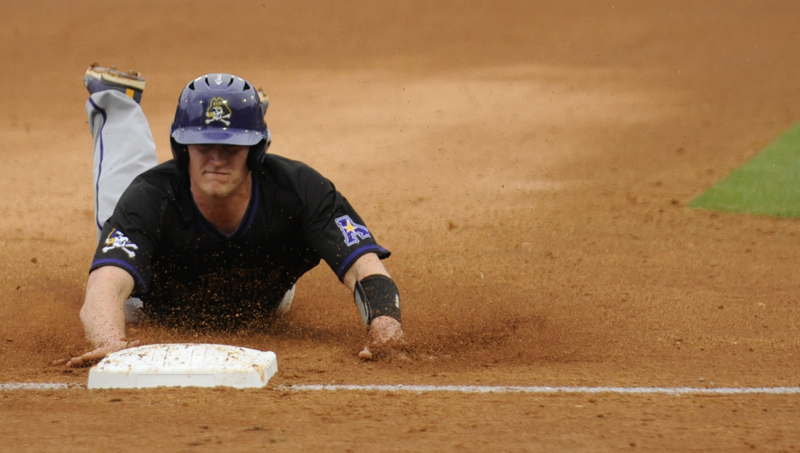 Kushmaner got the win after pitching four innings, giving up four hits, three runs, a walk and picking up two strikeouts on the game. ODU starter Morgan Maguire was dealt the loss for the game after pitching three frames, giving up five hits, six runs (five earned), two walks and earning one strikeout.

“I thought it was big for (Kuchmaner) to be a freshman and get out there and get his first start,” head coach Cliff Godwin said. “We got him some run support in the first and that allowed him to relax early. He filled the strike zone and I thought he pitched great for us today.”

The Pirates never trailed in the game as they scored three runs in the bottom of the first inning. ECU had its first six batters reach safely. Designated hitter Alec Burleson got the scoring started when he sent shortstop Turner Brown home on an infield single with no outs.

Left fielder Bryant Packard scored later in the inning on a fielder’s choice, and right fielder Dwanya Williams-Sutton sent first baseman Spencer Brickhouse home for the third and final run of the inning.

The Monarchs answered in the top of the second after a leadoff double to deep left field to get into scoring position, and later advance to third, thanks to right fielder Brian Morley. Runners were stranded on the corners until centerfielder Matt Schwarz reached base on a fielder’s choice that was not thrown home. However, that would be the only run ODU would pick up until the fifth inning, and it eventually found itself down by as many as five runs.

“(Kushmaner) fills the zone, so our job in the defense is to make the plays, I mean that’s all we can ask out of him,” third baseman Connor Litton said. “He’s in there (because) he’s good with his craft and he has to pitch with what he’s got. We were glad to have him out there starting for us.”

Leadoff batter Brady Lloyd reached safely in the second. He advanced to third off of Brown’s sacrifice bunt, and Packard hit a two-run home run, his first of the season, to right field to give the Pirates a 5-1 lead.

“It felt good. I hung a 3-2 changeup. I just stayed on it and saw a solid approach. I’d say that’s probably my most comfortable position to hit (second), and it’s a really good spot,” Packard said.

ECU extended its lead to five after catcher Seth Caddell scored Litton. Litton led the Pirates. He was 3-of-4 and scored two runs. He now finds himself batting .467 on the season.

After Kushmaner’s exit after the fourth, Matt Bridges came in for the Pirates in the fifth. ODU inched closer with two runs of its own thanks to replacement catcher Jimbo Reemsnyder, who drove in the Monarchs’ two runs that inning.

Chandler Jenkins joined Packard with his first long ball of the season — and first in a Pirate uniform — with a three-run shot that extended ECU’s lead to 9-3 in the seventh. He was pinch hitting for Williams-Sutton, who was experiencing wrist soreness.

ECU will next be in action this afternoon against Pepperdine for the first game of the Keith LeClair Classic. Pepperdine sits at 3-6 on the season after a 15-2 loss to a Campbell team the Pirates handled, 7-2, on Feb. 21.

The Pirates will play Missouri State on Saturday. The Bears have yet to play a home game this season. The weekend concludes with Saint Joseph’s on Sunday. The Hawks have only one win in four tries this year.

“I hope our guys feel good, but we still have to be on edge,” Godwin said.