Williams laser focused on next level 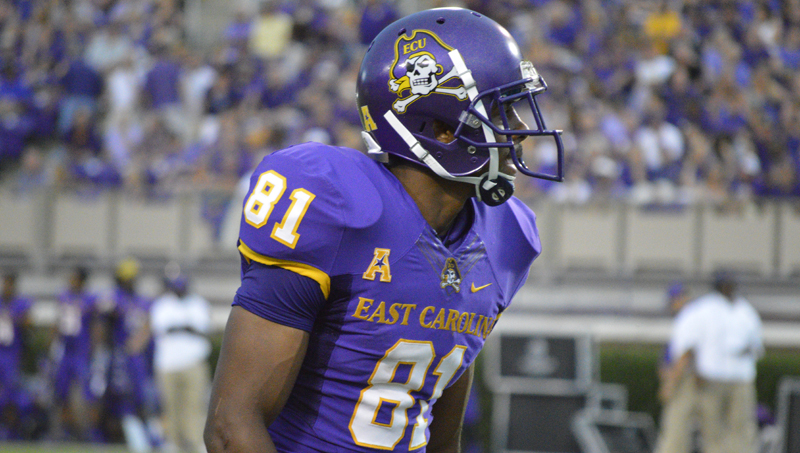 Jimmy Williams has his eyes on the defensive back opposite him during a game with East Carolina.

Jimmy Williams was driving home one night a few weeks ago. He almost ran a stop sign because he was thinking about the L drill he ran earlier that day.

That’s how focused — how completely consumed — Williams has been on preparing for his March 29 pro-timing day. Training has been his sole purpose for months now. It’s on his mind at just about every waking moment.

Playing professional football has been a dream since he was young. He’s dedicating every ounce of himself to earning an opportunity. He knows he has to be physically ready, but the mental preparation is just as important.

“That’s how you’ve got to be sometimes because the ultimate goal is to get to the NFL,” Williams said. “Striving. Getting better and better. There are hundreds or thousands of other people doing this. You want to be top notch and as good as you can be.

It’s his key to training. Williams prides himself in putting all he has into football. It’s how he went from Washington’s quarterback to walking on as a receiver at East Carolina to earning a scholarship. It’s how he’s battled back from a laundry list of injuries to get to this point.

It’s all in his mindset.

Read more: Jimmy Williams is being guided by pros

But there’s a line. Williams isn’t trying to psyche himself out. He doesn’t measure himself each time he runs the 40-yard dash or works on his jumps. He doesn’t need to. Williams can tell when his execution wasn’t perfect.

It doesn’t take Williams much to unwind when he’s away from football. He got a chance to see some ECU and Pam Pack basketball games this past season. He spends time with his son.

When he’s on his own, Williams enjoys things that take him back to his childhood. He still keeps up with the Dragon Ball Z series. His videogame collection has the new Call of Duty game in it, but it’s still unopened. Instead, he opts for some classics like a 10-year-old NCAA game on his Xbox.

“I had a Dreamcast, but I got rid of that,” he said. The SEGA console was released in 1999. “I really like doing everything I grew up on. I really like listening music more than anything to unwind. I really love music.”

Williams’ musical selections have also been a throwback. He said he enjoys 2000s tunes. He also said Terrance Copper had been playing a 1990s and 2000s stations on Pandora.

“Early 2000s and late 1990s is what I’ve been listening to lately,” Williams said. “Going on walks and listening to music, that’s really my life. When I’m with my son, watching him do everything that he sees, football-wise … that’s all he wants to do.”

There’s no question where his son learned that. Williams is the same way. All he wants to do is to continue to play football. It’s all that’s been on his mind, but the Pam Pack product is doing well not to burn himself out.

This story is the third in a series on former Washington and ECU receiver Jimmy Williams. Check each Wednesday issue of the Washington Daily News leading up to pro day on March 29.