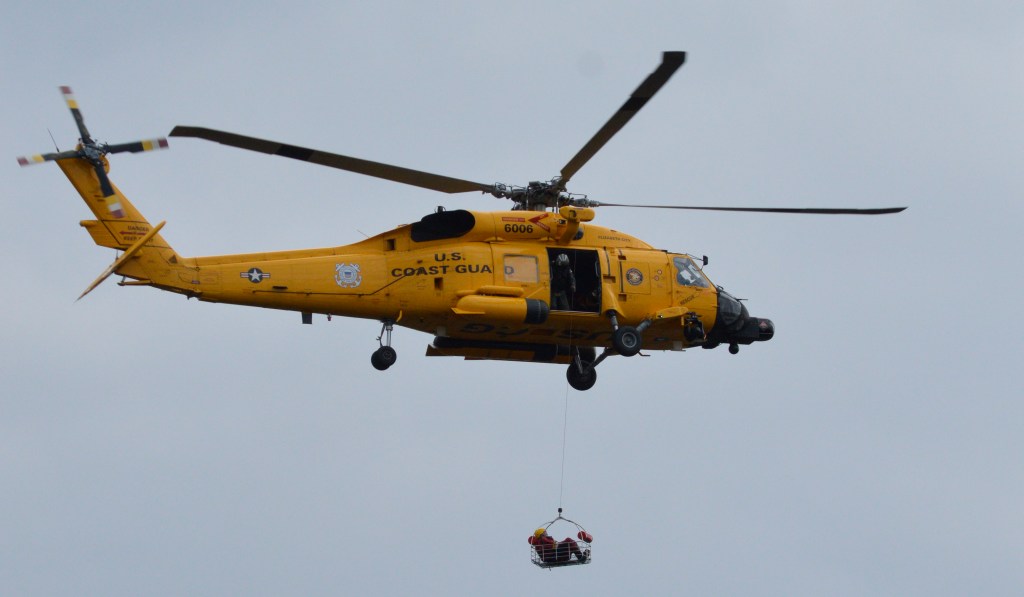 A North Carolina State Highway Patrol helicopter lowers a dangling rescuer into the cold waters of the Tar River as a bright yellow Coast Guard helicopter hovers over a nearby stretch of woods. Specialized rescue boats patrol the shoreline. A moment later, the rescuer emerges, hoisted from the water with a passenger in tow. Lifted to a nearby field, the pair touches down into the waiting arms of first responders waiting to provide care to the rescued.

Such a scene could potentially play out on any given day in Beaufort County. This week, a three-day series of training exercises at Griffin Airfield on Wednesday, Thursday and Friday served to ensure that local first responders are ready when they do. “Any time you think of a specialty rescue, such as a water rescue or a wilderness rescue, that involves a lot of different agencies,” said Chris Newkirk, Beaufort County operations chief of fire and emergency management. “This type of training allows us to bring all of those agencies together and allows us to rely on each other’s strengths and weaknesses.” “Today we are doing wilderness and water rescue,” Newkirk said during the Thursday training. “That includes both rescue boats with specially-trained rescue swimmers, and also helicopter assets from the North Carolina Highway Patrol and the Coast Guard.”

In addition to contending with rough waters, Newkirk says that a rescue swimmer and victim may experience wind speeds of 70 to 80 miles an hour 100 feet below the rotors of a rescue helicopter.

“To put that in perspective, every time a rescue swimmer hits the water, they’re swimming in hurricane-force conditions,” Newkirk said.

Statewide, N.C. HART utilizes Highway Patrol and National Guard helicopters, as well as a network of rescue technicians located throughout the state. Rescue technicians are located locally in Greenville and New Bern. In such an operation, interagency cooperation and communication becomes paramount. LIFELINE: An N.C. HART rescuer and a mock victim hang from a North Carolina State Highway Patrol Helicopter during a short-haul rescue, a maneuver that quickly removes a victim from a dangerous situation. (Matt Debnam/Daily News)

“It might be a Highway Patrol pilot, a fireman from Raleigh Fire-Rescue, North Carolina Emergency Management coordinating it all,” Newkirk said. “The county EM person is the connection between the state and the helicopter, so there are a lot of moving parts in that one call. The first responders, whether its volunteer firefighters or EMS, are the ones who take care of the patients when HART releases them.”

Locally, Newkirk says that the majority of Washington’s fire personnel have water-rescue training, and that Beaufort County is working to establish a swift-water rescue unit. “The county as a whole has really come together with our first responders to start to build a good foundation for a water-rescue response,” Newkirk said. “We have not only Washington with these assets, but also Bunyan, Bath and Sidney Dive team.”

For more information on N.C. HART, click to www2.ncdps.gov and search ‘NC HART.’