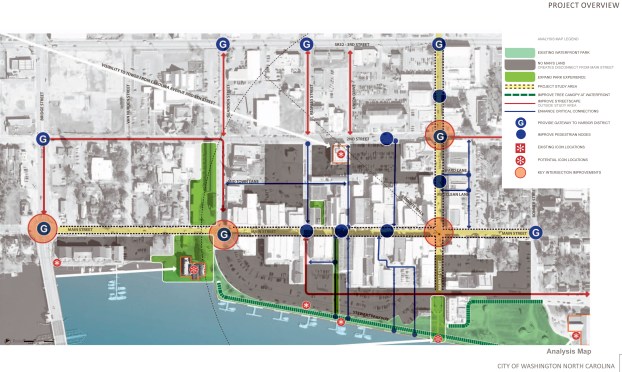 Washington officials are considering completing a one-block section of its planned downtown streetscape improvements project as a way to leverage more state grant funds for the entire project.

During its Feb. 26 meeting, the City Council and Mayor Mac Hodges discussed the issue during its review of projects included in the city’s capital-improvements plan. The annual CIP review is part of the city’s yearly budget-preparation process.

In August 2017, the council endorsed a master streetscape plan. In May 2015, the council approved spending up to $29,600 for that plan. The city provided $25,000 for the plan, with the Washington Harbor District Alliance providing $4,600 for it.

The city plans to implement the streetscape project in phases as it finds money for the project’s components — a pay-as-you-go plan. That project includes, but it not limited to, aesthetic improvements such sidewalk upgrades, reconfiguring the intersection of Gladden Street, West Main Street and Stewart Parkway and landscaping. The one-block section on West Main Street runs from Gladden Street westward to Respess Street. The $275,000 in the CIP for the 2018-2019 fiscal year, which begins July 1, does not cover the cost of installing new water and/or sewer lines and other utilities in that one-block section.

John Rodman, the city’s director of community and cultural services, told the council it’s time to begin implementation of the overall streetscape plan developed by Land Design several years ago. The plan, under the scope of services agreement between the city and LandDesign, would cover the area along Main Street between north-south Bridge Street and north-south Bonner Street and from north-south Market Street between N.C. Highway 32 (Third Street) and the waterfront.

“I think it’s way past time to start working on this item,” Mayor Mac Hodges said.

Rodman said the city could “always come back and do some utilities,” noting the $275,000 is for above-ground improvements in the overall project area.

Hodges said he would rather see a one-block section of the project area completed — including new utilities lines and aesthetic improvements — than a hodge-podge approach. That, according to Hodges, would show the city’s commitment to implementing its streetscape project. That commitment could result in the city receiving more grant funding to pay for the entire project, he said.

Hodges said Goldsboro was turned down about five times for state funding to help pay for a similar project. After completing a one-block section of its streetscape plan, it received state funds to continue implementing its plan, he said. He believes Washington would benefit by following Goldsboro’s approach.

Hodges said it would make sense for the city to install new water, sewer and underground electrical lines while doing other project-related work above ground.

“We can certainly do what the council chooses to do. If we do have some additional funds for utilities, we can certainly do it all at the same time,” Rodman said. “All I am doing is putting in the above-ground money for improvements.”

The streetscape plan outlines aesthetic and infrastructure changes for the downtown/waterfront area. It would include, but not be limited to, the following items:

Washington’s City Council is moving toward parking restrictions on a section of Water Street and the parking lot at the... read more