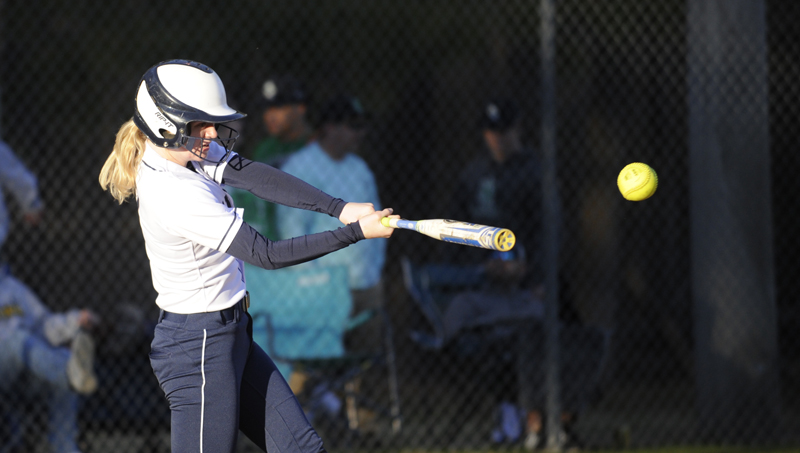 Emme Davis puts her bat on the ball in the first inning of Washington’s win Friday.

Washington coach Doug Whitehead wanted his team to score in each inning of Friday’s meeting. The Lady Pack missed that mark in just one frame in a five-inning 10-0 win for its fifth win in a row to begin the season.

It got started when Grace Lassiter’s sacrifice fly plated Summer Campbell, and wrapped up as Washington exploded for six runs in the bottom of the fifth.

“I’m trying to get them to score early,” coach Doug Whitehead said. “They did what I asked them. … That (North Lenoir) is a very young team.”

All the while, sophomore pitcher Abbi Tucker mowed down nearly every batter she faced. The Lady Hawks got a single in the first inning. After that, Tucker set down the next 10 to step up, striking out eight of them.

“She threw 64 pitched Wednesday and 60 (Thursday),” Whitehead said. Tucker has stayed relatively fresh due to Washington wrapping up games early via the mercy rule. “Her motion is just as smooth as can be. … She’s just throwing with ease and the ball is moving around. So far, the teams we’re playing just aren’t used to her speed.”

“Drop curve and high-inside screwballs,” she said of her most efficient pitches thus far. “My changeup, every now and then, really comes in handy.”

Washington worked with two outs to double its advantage in the second. Mariah Gurkin reached and moved to second on a throwing error before being batted in by Desiree Maurizzio’s single to shallow centerfield.

Emme Davis doubled down the left-field line in the third. She scored when Lassiter’s knock resulted in an error. Macie Main, running for Tucker, came home on a passed ball. That doubled the lead again, making it 4-0 after three.

Every Lady Pack batter to step to the plate in the fifth reached. The surge began when Main dropped a shot in a gap in left-centerfield, allowing Kaylee Elks to come in. Sydney Keech, after drawing a walk, scored on a passed ball, and two more came in on Mary B. Dixon’s knock to left-center.

Campbell touched home for the final run thanks to an error, giving the Lady Pack the 10-run lead to enact the mercy rule.

Washington’s conference slate next week will feature Ayden-Grifton and South Lenoir teams that have combined for seven wins this season. The Lady Chargers, who visit Tuesday, have former Lady Pack player Meghan Horton as an assistant.

Washington off to 2-0 start in ECC after clipping…