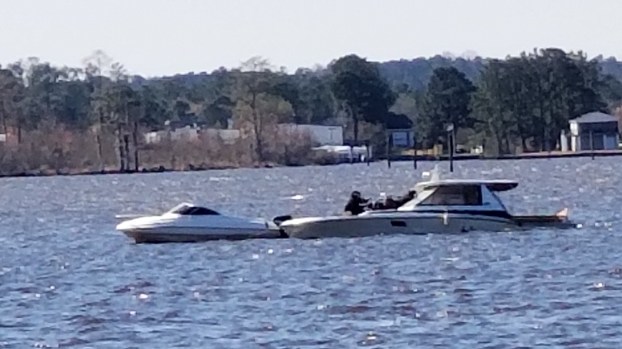 REMOVED: This powerboat, which sank off of Haven’s Garden earlier this month, was raised and relocated over the weekend. (Daily News)

This past weekend, the Daily News ran an extensive article on the issue of abandoned and derelict vessels in the Pamlico River. The key question driving that article was that of who is responsible for cleaning up the ADVs in Beaufort County.

The short answer is nobody.

The long answer is everybody. Speaking to numerous officials at the state and local level, there is no assigned protocol for dealing with abandoned and derelict vessels in the state of North Carolina.

Rather, the authority to create regulations on the issue has been delegated by the N.C. General Assembly to county governments. At least three counties in coastal North Carolina have done so. Brunswick, Dare and New Hanover counties each have some varying degree of ordinance on the books to address the issue of abandoned and derelict vessels. Beaufort County does not.

The rub of the entire issue is funding. No one local government, organization or government agency wants to add ADV mitigation to its budget, and nor should it have to.

Instead, the last documented owner of an ADV should be held fully responsible for all costs associated with the cleanup or removal of that vessel. Currently in North Carolina, the only way to hold boat owners accountable is through a county ordinance.

This does not necessarily mean that the county would have to take full financial responsibility for removal. Such an ordinance could be a simple as the Beaufort County Board of Commissioners adopting regulations defining ADVs and going a step further and codifying that abandoning a vessel in the waters of Beaufort County is illegal. Were the board to create such an ordinance, input from boaters would be crucial.

In terms of funding, establish a schedule of criminal and civil penalties for those in violation of the ordinance. Enforcement, left in Brunswick County to the sheriff’s office, will cost money. So would removal if such an action was ever taken. Better yet, establish a fund from some of these fines specifically for ADV removal.

Allow a nonprofit or a group of nonprofits with interest in the river’s health to manage the fund. Have community fundraisers for the purpose of ADV removal. Partner together to make it happen, for the good of Beaufort County and its waterways.

At the heart of this issue is taking responsibility. There are enough people interested in addressing this issue to do something about it. It doesn’t have to all fall on one agency, organization or government and through a thorough system of fines, the expense to taxpayers could be greatly reduced or even nullified.

Let ultimate responsibility for these vessels be placed on those who put them there in the first place. Only by taking this small step can the community begin to address everybody’s problem.

Taking risks to bring attention to the issues

To the Editor: And a little child shall lead them (Isaiah 11:6). It is comforting to think of the students at... read more