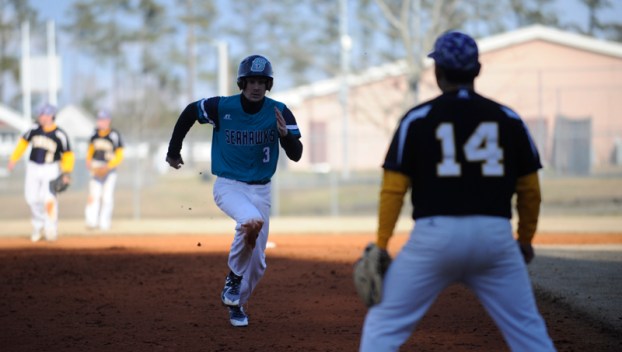 Grant Jensen makes a beeline for third base last week. He and the Seahawks picked up their first win of the season on Monday.

CHOCOWINITY — Cody Modlin stole third base to get in position to score the game-winning run on Demetrius Ebron’s base hit. The marker was enough to lift Southside past Columbia, 5-4, in the ninth inning of Monday’s game.

It also marked the Seahawks’ first win in five tries this year.

The two team’s matched one another tit-for-tat throughout the game. Columbia struck for three runs in the top of the first, but Southside scored three of its own in the bottom of the opening frame.

Each side added one more in the sixth before Southside walked off in the ninth.

Ebron, Jarrett O’Neal and Josh Toler each had a pair of hits. Brantley Cutler’s only hit of the game went for a double, and he finished with a team-high two RBI. Three others also had a hit.

CHOCOWINITY — Tanner Boyd went 2-for-4 with three RBI to spearhead TEACH’s fourth win in as many tries — a 12-2 rout of Mattamuskeet. The win marks a hallmark moment for the homeschool program.

“It’s big when we get a win against a public school and against a good pitcher like Chase Williford,” coach Donell Albritton said.

Carson Hardee — of Greenville’s North State Little League fame — earned the complete-game win as he allowed only two runs (one earned) on four hits and no walks. He struck out 10 of the 23 batters he faced.

“Apart from Washington, because of their pitching solely, I truly believe we have the best team in Beaufort County,” Albritton said.

Macy Main improved to 3-0 as she pitched three innings of Unity’s 14-0 shutout of Terra Ceia Monday afternoon. Chloe Boyd maintained the shutout as she threw the final two frames.

Offensively, Unity was led by Lilly Wallace. She went 3-for-4 at the plate.

Unity improved to 4-0 on the season and will be at Ridgecroft for its next game.

CHOCOWINITY — Freshman Sarah Petty scored a goal in the first half to send Southside into halftime tied with North Pitt at 1-1. The visiting Lady Panthers found twine in the second half, though, and neutralized the Lady Seahawks in a 2-1 win.

The shortcoming is only Southside’s second loss of the year. Both have come against 2-A schools.

Goalkeeper Carleigh Findley made seven saves in the close loss.

Northside owned boys’ basketball in Beaufort County this past season. The Panthers ran roughshod on the local competition by toppling... read more