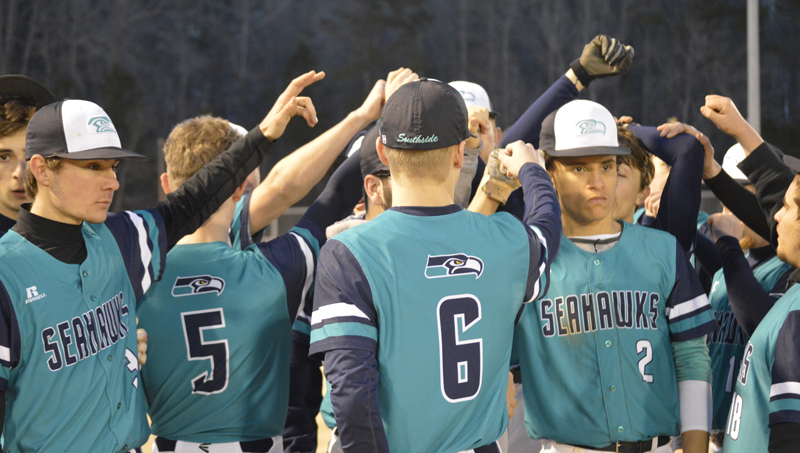 The Seahawks gather together after a lopsided loss Friday.

CHOCOWINITY — Southside coach Kevin McRoy — if he had to pinpoint one thing — said the Seahawks are lacking in the confidence department. They were riding high after winning their first two games of the season, but that quickly dissipated in a 13-0 loss to Riverside Friday.

The Knights put the bat on the ball right away. They put it in play, and Southside struggled to make the routine plays that would have negated the three runs that came across in the opening frame.

Spotting opponents a few first-inning runs isn’t new, though. Southside gave up three to Columbia and two to Jones Senior this week, but managed to win both games.

The Seahawks, after falling behind 3-0 in the top of the first, had Jonathan Hernandez draw a lead-off walk and loaded the bases with one out. Consecutive strikeouts left all three stranded, then Wood Trowell fanned another three in a row in the second.

Southside managed to escape a bases-loaded jam in the second, but Riverside tacked on two more in the third before exploding for seven in the fourth.

The Knights got three on with none away. Southside had a chance to minimize damage when it got back-to-back fly outs that only brought one run in, but Austin Scott stepped up and belted a two-run double to left-centerfield that made it 8-0.

The game came unraveled from there. The Seahawks made a pitching change. Another run came in on a passed ball before Jake Raynor went the yard for a three-run home run.

Southside came and went quietly as the last six to come to the dish were retired promptly.

The Seahawks expect to have starting second baseman Carter Barnes back for Tuesday’s game against Southside. The hope is he’ll help shore up the infield defense.

“He and Demetrius (Ebron) have played together for years. They know what the other is going to do,” McRoy said. “It’s a sense of stability and familiarity. I did think Hundley (Stallings) came in, as a freshman, and played well.”

Southside hopes to build momentum against the Panthers, and then in Pinetown in Northside’s Easter tournament.