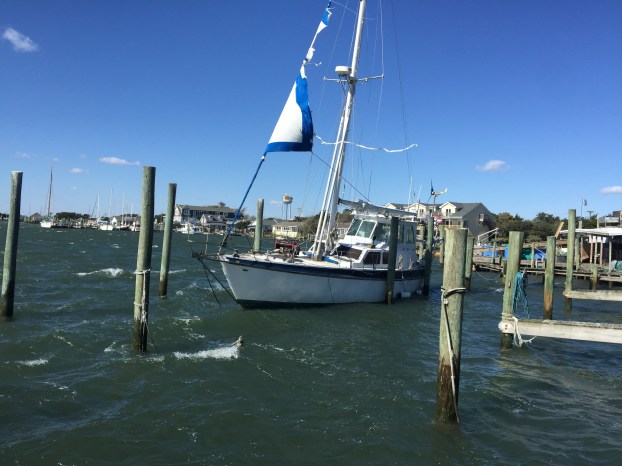 POSING PROBLEMS: During its meeting Monday, the Hyde County Board of Commissioners is scheduled to conduct a public hearing on a proposed ordinance that addresses abandoned and/or derelict vessels like this one in Ocracoke Island waters. Such vessels are hazardous in several ways, according to county officials and others. (Hyde County)

During its meeting Monday, the Hyde County Board of Commissioners is scheduled to conduct a public hearing on a proposed ordinance regarding abandoned vessels in the navigable waters of Ocracoke Harbor, also known as Silver Lake.

Abandoned vessels are an increasing concern for several local governments, including, but not limited to, Washington.

“It is an issue in Silver Lake (Ocracoke). In the last 60 days we have had 6 derelicts/abandoned sailboats break anchor and damage or threaten to damage boats and private piers. We hulled and crushed and disposed of 3, 1 was towed out of private docks it had damaged and 2 are derelict as we speak. One aground on private property and one snagged up on another’s mooring ball,” wrote Hyde County Manager Bill Rich in an email.

The proposed ordinance’s purpose section reads: “It is recognized that the use of vessels on the public waterway of Ocracoke Harbor, commonly known as Silver Lake, located in Hyde County, North Carolina is a widely enjoyed form of leisure and recreation. It is equally recognized that some owners of vessels do not safely and properly moor, anchor, locate, or otherwise dispose of their vessels which can result in the abandonment of vessels. Abandoned vessels have a detrimental impact on the health, safety, and welfare of the citizens of Hyde County and those using the public waterway of Ocracoke Harbor and have a detrimental impact on the peace and dignity of Hyde County, North Carolina.”

The proposed ordinance state that the owner of an abandoned vessel is responsible for all costs — towing, relocation, storage and disposal — of the vessel and restoration of the area surrounding the abandoned vessel, whether the county removes the vessel or a third party removes it. Under the proposed ordinance, the county has the authority to dispose of an abandoned vessel, including its cargo, tackle and equipment, at its discretion. That may mean conducting an auction or a direct sale to an interested party.

The proposed ordinance defines an abandoned vessel as one that meets the following criteria:

The N.C. General Assembly has granted the power to address abandoned vessels to the counties. According to state statute, a county may, “by ordinance prohibit the abandonment of vessels in navigable waters within the county’s ordinance-making jurisdiction.”

At least three coastal counties, including Dare, New Hanover and Brunswick counties, have adopted ordinances to address the issue. The City of Washington’s Planning Board discussed the issue during its meeting Tuesday.

Board wants more information about proposed sand mine

Washington’s Planning Board wants more information before acting on a request to amend the city’s zoning ordinances to allow mining... read more