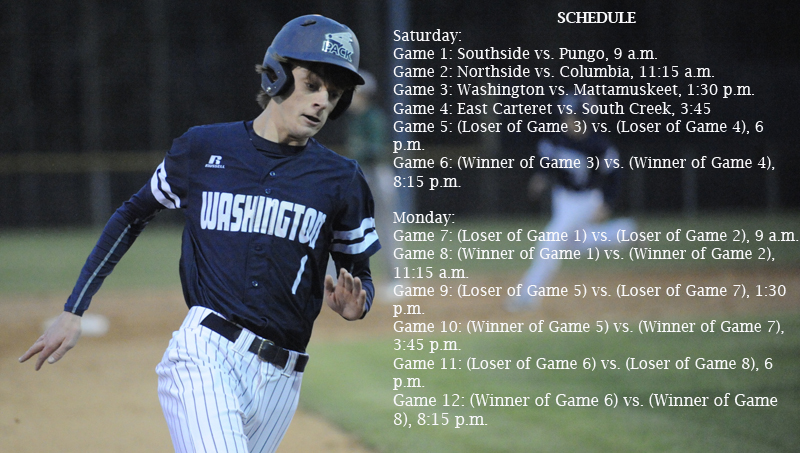 Washington’s Logan Everette rounds third base in a recent game. Everette masterminded a 14-0 win over Northside early in the season.

Northside’s Easter baseball tournament has become an annual tradition in which Beaufort County’s best baseball teams get a chance to go head-to-head without much more than bragging rights on the line.

Washington, Southside, Pungo and the hosting Panthers will be among those in the field. Win or lose, each team will look to use this opportunity to learn ahead of the second-half push once spring break ends.

Here’s a look at what each local club should seek to figure out this weekend:

Honestly, there may not be much the Pam Pack needs to sort out. It stumbled at 2-A Eastern Carolina Conference foe South Lenoir last week. However, Washington got right back on track Monday when it knocked off Rose, which was ranked by MaxPreps as one of the best in North Carolina.

Coach Kevin Leggett may use this tournament as a chance to see what he has in terms of reserve players. His team has already lost senior centerfielder Carson Asby to a season-ending injury, so getting backups some more experience would be valuable to a team hoping for a long postseason.

Anything less than the tournament title would be a disappointment for the Pam Pack. It blasted Northside, 14-0, in the first week of the season. That kind of domination over the county’s second-best team should mean smooth sailing for Washington.

Northside will want another shot at Washington. The Panthers and Pam Pack have had some thrilling games in the tournament in the past. The hosts have the pitching depth and experience to compete, especially if their bats are as strong as they have been lately.

The two could possibly meet in the championship game Monday night, which would be ideal in terms of measuring improvement. Washington did all of their scoring in two innings in the March 9 contest. The lopsided loss in that game could be partially attributed to Northside having played its third game in as many days.

That said, a possible championship showdown with the Pam Pack will be similar. Both teams will be playing for the third time in three days, and second time on Monday. That game will be a chance for a senior-laden Northside team to demonstrate increased mental toughness.

The Seahawks played what coach Kevin McRoy described as their best game of the season in a 9-3 loss to Northside on Tuesday. The game was closer than the score would indicate. Southside then turned around and thrashed South Creek, 14-1, Thursday to build some momentum heading into the Easter tournament.

First and foremost, Southside should aim for a clean game: no errors and minimal walks. That’s how the Northside loss got out of hand late.

The Seahawks have also been working some injured players back into the lineup. This weekend should provide a low-stress chance for Southside to continue building forward momentum. Conference standings won’t be on the line. Noticeable improvement from last week’s 12-0 loss to Riverside could do a lot in terms of boosting confidence going into the second half of the season.

Pungo is a relative unknown coming into this tournament. The Raiders are the only non-NCHSAA school from the eight-team field. That may put them at a disadvantage, but it may also give them a chance to capitalize on being overlooked.

This tournament will pit Pungo against some of the best baseball players it will see all season. That could affect confidence in the short term. But, with some time off for spring break, the Raiders will come back ready to take on whatever the Tar Heel Independent Conference has to offer.

That is even more important considering Pungo sits at 4-3 in its league with three-straight road games looming after the break.