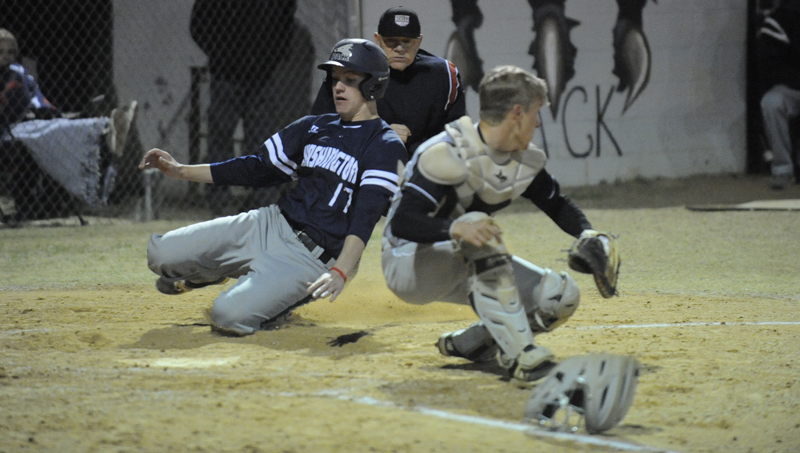 Hunter Hall slides behind catcher Matthew Marslender to avoid being thrown out at home.

PINETOWN — Washington and Northside partook in a defensive duel for two innings until the Pam Pack batters broke loose. It capitalized on a few Panther errors to scored a pair of runs in the second frame.

The floodgates opened from there in a 13-0 pounding to finish the Northside Easter tournament 3-0 and win the title.

“We haven’t seen much velocity in a couple of games,” Pam Pack coach Kevin Leggett said. “We had to tell them again to be selective at the plate and find the pitch you want. Once they started doing that, we started hitting the ball and finding gaps.”

Northside had a runner on in each of the first two frames as its defense set down the first six Washington batters. Hunter Hall smacked a one-out single over the middle in the top of the third to give the Pam Pack its first runner.

Then Jeremiah Moore reached when the Panthers couldn’t field his bunt. Then Trippe Bonner and Chris Sulc drew consecutive walks to push across the game’s first run. Moore waltzed in thanks to another miscue, but Panther pitcher Zach Griffin notched a strikeout to escape with the bases still loaded.

“We kicked it around. Washington’s got a great team,” Northside skipper Keith Boyd said. “There were some errors behind (Griffin) in the third and fourth innings. Normally we make those plays. It kind of snowballed from there. When you play a really good team like that that scores run, you can’t give them runs.”

Junior southpaw Logan Everette carried the momentum to the defensive end as he fanned two Panthers to retire them in order in the bottom of the third. He had nine strikeouts in his second complete-game shutout of Northside this season.

Washington took complete control with five runs in the top of the fourth. Everette and Hall reached on errors to give the Pam Pack two on with one out. Moore followed with an infield single to load the bases. That set up Bonner and Sulc to rip back-to-back two-run shots.

Sulc’s shot to centerfield went for a triple, allowing him to come home when Frederick Holscher followed with a double into the right-centerfield gap.

“It’s contagious. It’s kind of like take one and pass it down,” Leggett said. “Once you get in a pitcher’s head, and you start hitting the ball, it works for everybody.”

Northside threatened in the bottom half of the fourth. The Panthers got Tanner Alligood and Memphis Slade-Credle on the corners with two outs, but Everette got the final out at the plate to strand them.

Washington continued to pour it on with six more runs in the fifth. Everette and Tyler Harrell led off with back-to-back doubles. Sulc and Wilson Peed also knocked in runs before Everette — in his second at-bat of the frame — pushed across the final run. 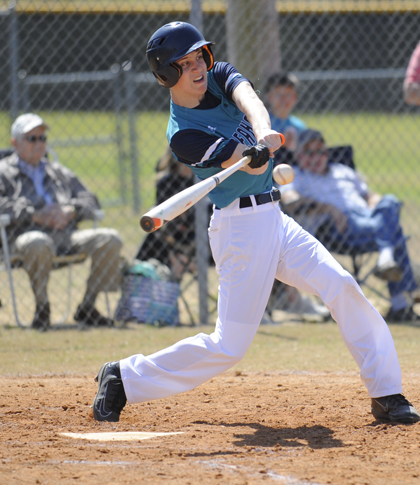 Carter Barnes tees off on a pitch during Monday’s clash with Northside.

The road to the championship

Northside had to beat rival Southside to earn its trip to Monday’s championship game against the Pam Pack. The game was similar to the Panthers’ 9-3 win in Chocowinity a week ago in that it took advantage of depleted Seahawk pitching to pull away late.

The Panthers scored five times on only three hits in the top of the sixth to coast to an 8-0 win over the Seahawks.

Northside drew first blood by scratching together a run in the top of the second. Landon Ormond capped off a long leadoff at-bat by drawing a walk. He ended up touching home on Reg Bishop’s base hit.

Southside kept the game close until Northside generated another run in the fifth. Parker Boyd plated Bishop with a smack to left field to make it 2-0 an inning before the Panthers’ offensive explosion.

“I thought we played well for the first five innings, and then we made a few errors,” Seahawks coach Kevin McRoy said. “I felt like we kind of hung our heads. We’ve got to be mentally tough to play this game. We ran out of gas.”

Northside added one more in the top of the seventh for good measure, punching their ticket to Monday’s main event.

Washington, after giving up the game’s first run, flew past East Carteret in its second game on Friday. The Pam Pack answered the Mariners’ first-inning score with three runs in the bottom of the inning.

Sulc and Drew Ferguson were 4-for-4 to lead Washington to its 9-3 win. The two combined to score four of the Pam Pack’s runs. It blew open a 5-3 game with four runs in the bottom of the fifth. 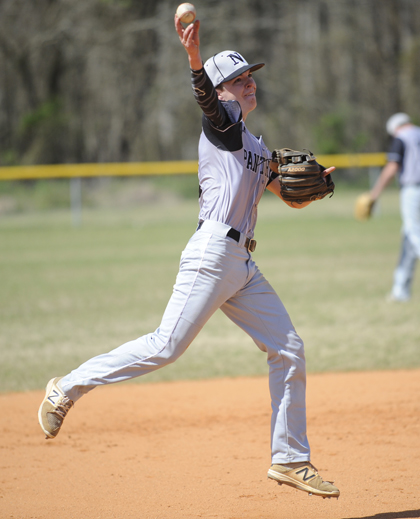 Reg Bishop makes a running throw from shortstop to first base.

No easing back in

Washington rolled through the Easter tournament, and Northside had plenty of positive takeaways in its 2-1 showing. The Pam Pack will roll into the second half of the season with momentum. The Panthers will have eight days off to put this loss behind them.

Northside welcomes the time off. When it returns next week, it will have no time to ease back in. The Panthers will come back to a three-game week that features a non-conference trip to Ayden-Grifton sandwiched between home games against Pamlico County and Riverside.

The Hurricanes are in the middle of the pack in the 1-A Coastal Plains Conference. The Knights stand atop the league with a 5-0 record. The first of those five wins was a 5-3 in Williamston over Northside.

“Maybe seeing that kind of pitching — and the experience and atmosphere of it — will help us down the road,” Boyd said. “It leads into next week where we have a good little run with Pamlico and Riverside. They’re up there in our conference.

Washington is in a similar position. It resumes 2-A Eastern Carolina Conference action with a trek to West Craven, which is the No. 2 ranked 2-A club in the state. The Pam Pack, which has a loose grip on the top spot in the ECC, ranks third among 2-A teams.

And then there’s a trip to North Lenoir the next week. The Hawks are also in the top-10 in 2-A baseball.

“We’re feeling pretty good. As long as we’re throwing strikes and hitting the ball like that, we’re going to be tough to beat,” Leggett said. “As long as the guys buy into it and put in the work, they can go as far as they want to go.

“The guys need a little rest and a mental break from things. Hopefully they put in the work over the break like they’re supposed to. If they do that, we’ll be fine.”