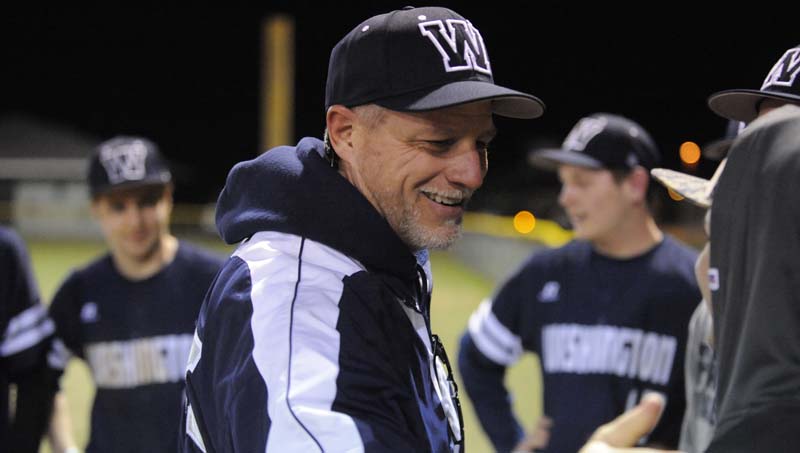 Washington assistant coach Rick Anderson shakes each player’s hand after coaching his last game, which was a win over Northside in the Easter tournament championship.

Washington baseball has done plenty of growth in the past few seasons. Head coach Kevin Leggett and assistant Rick Anderson have led the way in a Pam Pack resurgence since coming onto the scene four years ago.

The team has gone from 5-14 in 2015 — Leggett’s first season at the helm — to looking at their third-straight winning campaign. Washington has earned a postseason trip the past two years, and competed for a 2-A Eastern Plains Conference championship in 2017.

Now — one of top-ranked 2-A programs in the state per MaxPreps — the Pam Pack must bid farewell to Anderson. He recently accepted the principal job at Southside, which means he must give up his assistant-coaching duties.

“It’s hard really to narrow down one specific memory. Watching these guys play and watching them grow, get better, and become a pretty darn good baseball team has probably been my favorite,” Anderson said. “I’ve been with most of these kids since they were 8 years old through travel ball, rec ball, and school ball. Seeing it all this come into fruition has been nice.”

Leggett added: “Coach Rick has been there since I first got hired. … He stepped in, and he’s been a tremendous help. The guys love him. … He’s been a great help, and I hate that we’re losing him.”

That’s made for a strong relationship between Anderson and the players on the roster, as well as those that have come through the program. This year’s Pam Pack team — like many before — is a goofy bunch. They play a loose, fun brand of baseball, which is an easy attitude to adopt with the 40 wins they’ve earned since 2016.

That opportunity to get to know these baseball players on that level has also been one of Anderson’s favorite takeaways from the experience.

“They’re fun. It’s a blast,” Anderson said. “That’s the thing that makes sports fun: when you come out, you can enjoy it, make those kinds of relationships, and hopefully have an impact on them that is meaningful to them.”

Anderson won’t be in the dugout when Washington returns from spring break. He won’t be able to help call pitches, or direct Pam Pack runners as the first-base coach.

But his voice will still be heard. He’s been a part of getting this team to where it is now. That, combined with this being his son Cooper’s senior year, ensures Anderson will still be around.