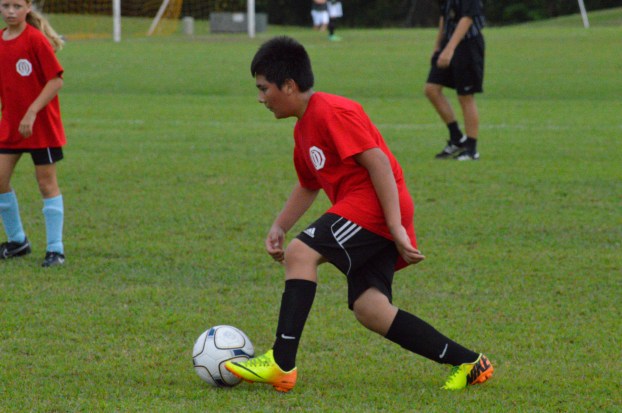 FAST BREAK: A Coca-Cola player starts a break up the pitch during a win over Pizza Inn in an Optimist Soccer League match shown in this file photo. (Daily News)

Washington’s City Council, during its meeting Monday, could award a contract to build a new concessions/restrooms building for the soccer area at the Susie Gray McConnell Sports Complex.

The previous concessions/bathrooms building has been removed from the complex in anticipation of a new building, according Patty Peebles, with the Optimist Club of Washington, which operates a youth soccer program that uses the complex. Peebles plans to present two proposals regarding construction of the new building.

Currently, available funds for the project include $90,000 (including $15,000 from the club) already in the city’s current budget, $15,295 from the McConnell family and $3,500 from the city’s recreation department. The city puts incurred costs — engineering, disposal of the previous building and relocating electrical utilities — at $5,624.66. To help pay for the option preferred by the club, the city would take $22,897 from its fund balance, or $11,337 to help pay for the other alternative, according to a memorandum from Kristi Roberson, the city’s parks and recreation director, to the mayor and council members.

“As part of the proposal we request that the City of Washington not charge our players to use the complex for 5 years and then maintain the $15.00 per player (fee) for the next 5 years to help us recoup the donation that we are making (toward) the new facility,” according to the club’s request.

The club wants a decision from the city as soon as possible so the new building could be completed by August for its fall soccer program, which is expected to have at least 500 children participating in it. The club’s spring soccer program attracts from 150 to 200 children, according to the club’s request.

The Turnage Theatre will be alight with the sound of music on Sunday. At 3 p.m. Sunday, Arts of... read more