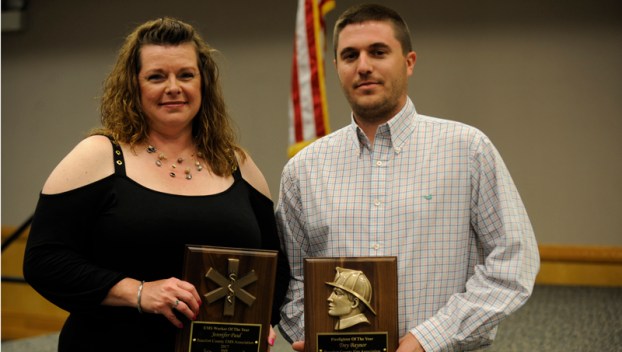 Every day, the men and women of Beaufort County’s fire departments and emergency medical services stand ready to answer the call of duty. 24 hours per day, seven days per week, 365 days per year, when the pager sounds, they are there to protect our lives and property.

Even during the annual Beaufort County Fire and EMS Awards Banquet on Saturday evening, firefighters and EMTs were rushing out the door to respond to calls during an event held in their honor.

Enjoying an evening of fellowship and food at Beaufort County Community College, emergency workers from throughout the county gathered for the event. Those in attendance took in music by Dennis Smith, hors d’oeuvres from Carryout by Chrislyn and dinner by T.C. Cannon.

As the program began, the group heard from Beaufort County Emergency Services Director Carnie Hedgepeth and EMS Operations Chief Glenn Mercer, both of whom expressed their gratitude for the work of first responders.

“Last year, we worked over 120 cardiac arrests in Beaufort County,” Mercer said during the program. “Out of those 120, we transported about 50 to the hospital with a return of spontaneous circulation. Of those we had 3 walk out of the hospital and return to lead normal, productive lives.”

Mercer shared the stories of each of resuscitations, recognizing the individuals responding to those incidents. Each individual will receive certificates commemorating their actions, each of which saved lives.

“These fire department first responders, when they’re called for help, they give up their time, their own personal money and time away from their wives and children to come serve their community,” Mercer said.

To conclude the evening’s program, Optimist Club of Washington President Patty Peeples presented awards for the Beaufort County Firefighter and EMS Person of the Year.

“This gentleman was chosen for his strong desire to not only help others, but to move his department forward,” Peeples said. “His commitment to his community is not something that is common in most people his age.”

“The EMS award winner has ascended the educational ladder to obtain her paramedic, and in this capacity she has provided professional and selfless service as a provider with White Oak EMS in Belhaven and then Beaufort County EMS where she has been a positive role model and educator,” Peeples said.

When the North Carolina General Assembly voted to enact legislation in 2013 that discontinued the practice of awarding career status... read more