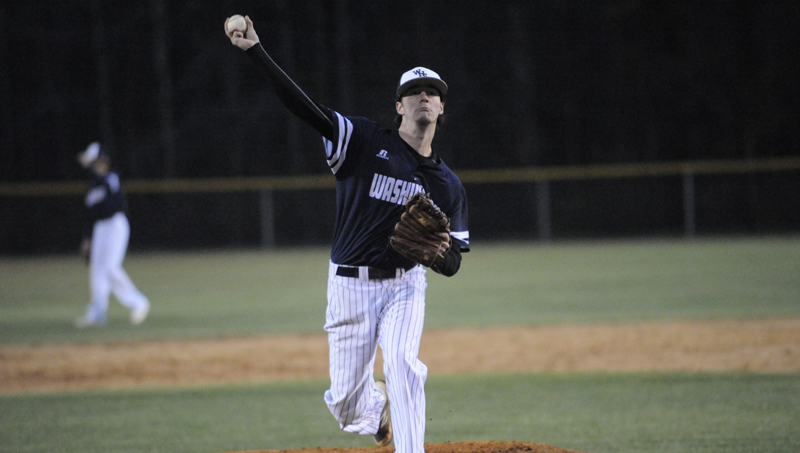 In a battle of teams sharing first place in the Eastern Carolina 2A Conference, one fateful inning was all the difference as the Washington High School baseball team fell 4-1 to visiting Greene Central last Friday night.

“It was just one inning where we kind of slipped up a little bit and we could never get the ball to bounce our way when we were at the plate,” Washington coach Kevin Leggett said.

It was the third inning that ended up deciding an otherwise tightly contested matchup. Pam Pack starter Hunter Hall, who opened the game by striking out the side, started the third by plunking Greene Central’s Jalen Conner. An infield single and a bloop single, from the Rams’ Jackson Batchelor and Tyler Horner respectively, eventually brought Conner home to open the scoring.

A Travis Mewborn single loaded the bases. Zach Taylor followed by crushing a Hall pitch into centerfield, clearing the bases and pushing Greene Central’s lead to 4-1.

“We made a little mistake here and there, they made a couple bloop hits that kind of snuck through,” Leggett said. “Just little things, just bad for us, good for them. They had one big hit that knocked them in.”

Despite what happened in the third inning, Hall had a strong game on the mound for the Pam Pack. He was in control the rest of the game and went the full seven innings for his first complete game of the year. Leggett was complimentary of the junior, who’s had to pitch more this season due to injuries.

“He threw well,” Leggett said. “He did a good job stepping up for us.”

Rather than the pitching, it was the Pam Pack’s bats that were the issue on Friday night. Washington’s hitters ended up registering only one hit on the night, while the only run scored was unearned.

The Pam Pack returns to action tomorrow, traveling to North Lenoir to take on the Hawks at 7 p.m.