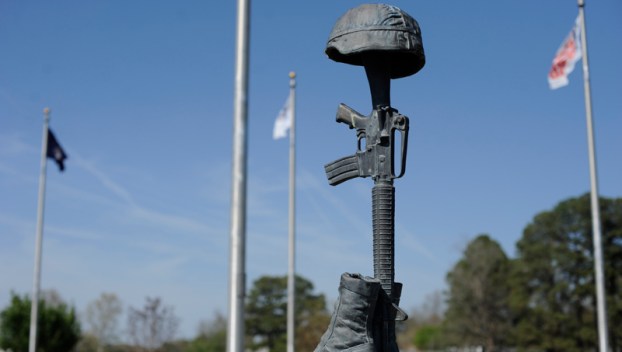 BATTLE SITE: The Battlefield Cross is a time-honored way of honoring the fallen on the battlefield or at base camp. An explanation of its symbolism will be part of this year’s annual Memorial Day service at Veterans Park in Washington. (Vail Stewart Rumley/Daily News)

It’s a day of remembrance, in which veterans are honored for the sacrifices made for their country. This year’s annual Memorial Day ceremony at Veterans Park in Washington will make that happen with a roll call of Beaufort County service members killed in action.

Juanita White, commander of Disabled American Veterans Chapter 48, and Joan Hanson, commander of the DAV Auxiliary Unit 48, are on a mission to collect the names of those Beaufort County service members killed in action during wartime. It doesn’t matter which war — only that they were from the area, according to White.

“I think this is something that will do healing for a lot of people — you know, the ones who have lost family members,” White said.

Each soldier killed in action, along with their rank, military branch and the war in which he was killed will be listed in the Memorial Day ceremony program; at least 25 of those names will be read aloud during roll call, accompanied by the tolling of a bell, White said.

Over the past two years, the local DAV chapter and DAV Auxiliary unit are revamping the traditional ceremony, giving it a personal touch with the roll call, but also using it as an opportunity to educate the public about some of the traditions associated with the day. Last year’s lesson: an explanation of each of the 13 folds made during a formal flag-folding; this year’s will be the meaning behind the Battlefield Cross, a replacement cross made by a soldier’s rifle stuck into his boots, his helmet perched atop the rifle stock.

“I feel that it will be reaching out to the community and actually bringing home a more clear understanding of what military families and veterans go through,” White said.

“It’s honoring our veterans and teaching our public,” Hanson said.

They’re also aiming to make the ceremony more inclusive by enlisting the help of the community, such as asking area Boy Scout troops to assist with the service, and arranging the attendance of veterans in residence at local nursing homes.

“We’re trying to get more people involved,” White said. “We’re taking from what we did last year and trying to make it better and improve on it.”

That includes the participation of Gold Star families, the surviving family members of those killed in action. Each will be greeted at the ceremony with a yellow rose; like the roll call, the name of their loved one killed in action will be listed in the program, along will a small bio.

“If we have them identified ahead of time, we will sit them in an area that we can get access to,” White said.

Also participating in the service will be guest speaker Cleveland Bryant, past DAV national executive committee member and state commander, and the Washington High School JROTC Color Guard. Prepared this year for potentially sweltering weather, a first aid tent with water and shade tents will be on site.

To have a veteran killed in action honored this Memorial Day, call Juanita White at 252-944-6614 or email sargwhite@hotmail.com. The ceremony will be held at 11 a.m. May 28.

Beaufort County’s unemployment rate fell from 5.4 percent in January to 5.3 percent in February, according to information compiled by... read more