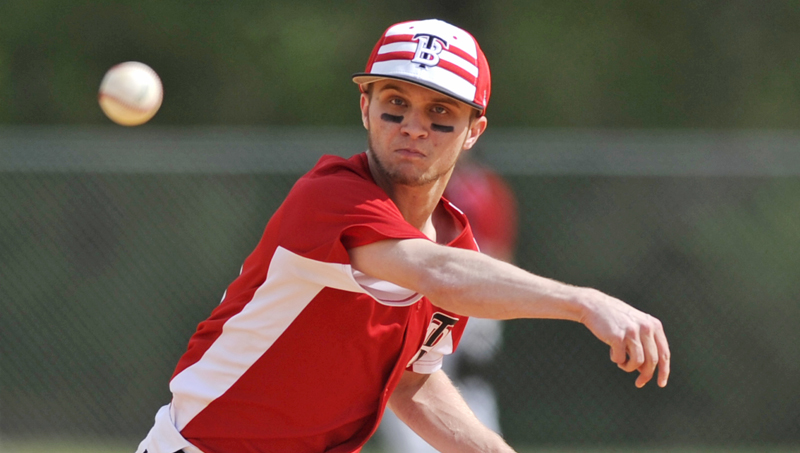 ANOTHER WIN: TEACH starting pitcher Cody Michelli fires in a pitch from yesterday’s game against Terra Ceia. Michelli was one of the seniors honored before the game. (Ashley Vansant|Daily News)

CHOCOWINITY— The undefeated Eastern Christian Homeschool (TEACH) baseball team honored its seniors with a ceremony before Thursday’s game against Terra Ceia and continued the festivities by defeating the Knights 24-9.

TEACH (15-0) has gone through a massive turnaround, record-wise, compared to prior seasons and it is something head coach Donnell Albritton is proud of. He said the learning experiences the team went through the past few seasons and great team chemistry have a lot to do with this newfound success.

“I tell the boys all the time ‘it’s your hard work that you put in prior to this that’s making you so successful,’” Albritton said.

The Trailblazers quickly jumped out to a big lead, something they’ve done for much of the year. By the end of the first inning, TEACH had built a commanding 6-0 lead over Terra Ceia (0-10) through a combination of timely hitting and defensive errors from the Knights.

The offensive outburst in the first inning was highlighted by the damage inflicted by the middle part of TEACH’s batting order. Already leading 2-0, Colby Case ripped an RBI-double. Cody Michelli, one of the seniors honored in the pregame ceremony,

followed that with a two-RBI inside-the-park home run that ended with Michelli sliding head first into home in a cloud of dust and dirt. Harrison Hardee followed with another double and was brought home by senior Tanner Boyd’s RBI single to cap the first inning’s scoring at 6-0.

Terra Ceia showed signs of life at the top of the third inning. Down 10-0 at that point, the Knights finally started making some contact with the ball and took advantage of some mistakes from the Trailblazers. Terra Ceia’s Omarion Blount began the run with a bloop single. Johannes Van Essendelft was then hit by a pitch, moving Blount into scoring position. Knight Jacob Dorn followed by reaching base on an error, allowing Blount to score. Jordan Brown then hit an RBI single, which got the Terra Ceia dugout off its feet.

Brandon Cox loaded the bases with a single, and the Knights’ dugout elevated its noise level even more in anticipation of cutting into TEACH’s lead. Perhaps feeling the heat, Michelli walked in a run. Albritton then made the decision to bring in David Valerioti to pitch and moved Michelli to the outfield, but that didn’t stop Zack Klaassen from hitting an RBI single to cut TEACH’s lead to 10-4. Unfortunately for Terra Ceia, Valerioti got the next batter to hit a pop fly, ending the inning and the Knights’ run.

With no more home games, TEACH will play its remaining six games on the road. And due to not being in a conference, the Trailblazers aren’t eligible for postseason play. That leaves staying undefeated as their goal for the rest of season, something they are confident about achieving.

“I feel like we’re the best team in Beaufort County,” Boyd said.