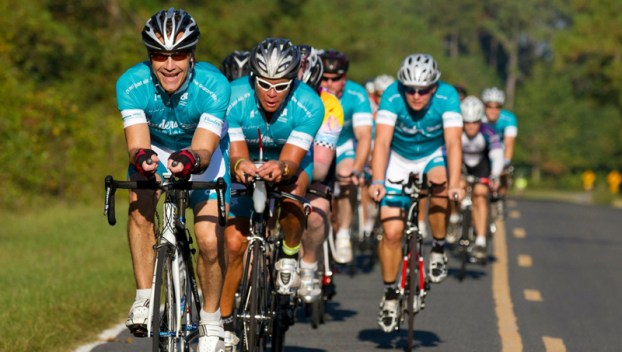 TEAMWORK: Cyclists use drafting to maintain speed as they take advantage of Beaufort County's rural roads. (Will Preslar)

Two-thousand cyclists have descended upon Washington this weekend, as part of the Cycle North Carolina Coastal Ride. One can’t go far these couple of days without seeing a group of cyclists, pedaling in unison. It’s a bit unusual to see so many people around here out riding, which might lead some to believe there isn’t much of a cycling scene in town. But there is, in fact, a strong and close-knit road biking community in Washington, fueled by the passion for cycling and the camaraderie that comes along with it.

The local cycling community revolves around Inner Banks Outfitters, which contains a bike shop. The store is owned by avid biker Liane Harsh, a self described “half-back” who grew up in Ohio, moved down to south Florida and then moved half way back to Washington to open up the store 12 years ago. At first, Harsh wasn’t out riding her bike, but she picked it up after promoting cycling as part of her running the shop. Now it’s her passion.

“When you get on a bike every single time it’s like when you were a kid. There’s this freedom that is indescribable,” she said. “I think there’s a freedom to it and what you get to see around here when you’re riding, it’s just beautiful. There’s nothing like it.”

Jill Paxson is someone who shares Harsh’s passion for cycling. Paxson was an athlete throughout college playing team sports. But when the New Jersey native moved away from her friends in Wilmington for a job, she found herself getting involved in individual sports, and cycling in particular.

As a life-long athlete, Paxson enjoys cycling because she can feed those competitive urges, while it isn’t as hard on the body as other activities.

Paxson moved to Washington in 2007 and met Harsh after hearing about the bike shop. Paxson promptly joined the group rides that head out from the shop, which rides once during the week and then on the weekends as well. Sometimes as many as 20 cyclists are in the group.

But cycling doesn’t just provide exercise and a way to satiate one’s competitive hunger. David Clark, who first started riding bikes for transportation back in high school and picked it back up again as an adult because he felt he was out of shape, enjoys the teamwork and camaraderie cycling provides.

You’re basically putting together a team and we’ve ridden together enough that we just work really well with each other. You don’t even have to talk about it, it works like clock work,” Clark, who grew up in western New York, said. “We have so much fun with each other. We give each other a hard time. Then you go get a cup of coffee afterwards and socialize.”

The passion for cycling is so strong among Harsh, Paxson and Clark, that even though the biking group meets up once during week, they all try to get out there four days a week and rack up at least 100 miles.

One of the reasons the cycling bug might’ve hit these three so hard is their location. Clark said he considers the country roads around here as among the best for cycling in the nation. Harsh also feels strongly about the area.

“Within two miles of any direction you’re out on beautiful country roads, farm country,” she said. “When the tobacco’s in full bloom it’s amazing!”