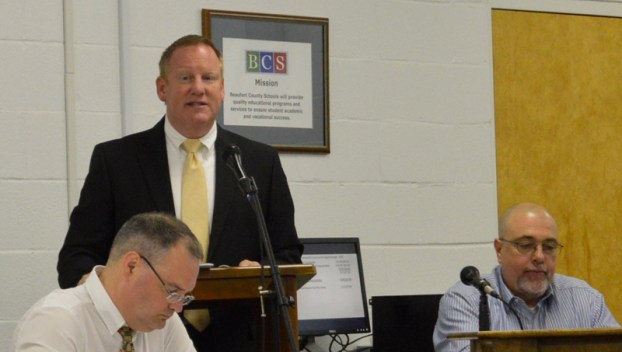 The Beaufort County Board of Education and Board of Commissioners met in joint session Monday to discuss a $17-million topic: local funding for school operations and capital needs.

While school systems receive funds from the state to meet instructional needs based on average daily membership at each school, funding for many daily operations, as well as capital needs such as buildings and infrastructure, falls to county governments to fund.

Highlights of the request include six new positions dedicated to marketing, instructional technology and mental health. In addition to a mental-health professional to cover the entire system, a teacher and a teaching assistant would provide an alternative setting for elementary students who might need counseling or therapy.

“We need to do a better job in terms of our mental-health services,” BCS Superintendent Dr. Don Phipps said during his presentation.

Increasing fixed costs, including retirement, hospitalizations and a potential 3 percent salary adjustment for some employees, represent approximately $402,375 in increases from the 2017-18 budget.

Seven locally funded teaching positions, along with one testing-technician position, would be eliminated through attrition in the proposed budget. These eight positions together represent a cut to local funding of approximately $394,500.

While the budget request did not include requests for additional student resource officers at any school, Phipps informed both boards that there might be additional funding from the state for security purposes.

On the capital side, the BOE requested $2,014,550 in local funding for the coming fiscal year. Almost half of this request is made up of three big-ticket items: $629,000 toward the replacement of five obsolete/damaged chiller systems at Northside and Southside high schools, $350,000 for technology upgrades and $200,000 in requested upgrades to cameras, camera systems and door locking systems.

The funding requests also include an estimated $4,262,707 for projected capital needs for the next two to five years.

Major projects include security upgrades in the form of connecting corridors at various schools throughout the county, various facility updates at each school, repaving projects and improvements to HVAC, chillers and boilers.

In the long term, a major wish list item on the BCS capital budget is the replacement of modular units at Chocowinity Primary, Eastern Elementary, John Cotton Tayloe and Washington High schools. These combined replacements could cost anywhere from $6,529,600 for metal replacements to $14,310154 for brick and mortar.

While commissioners took no action on the budget during the meeting, they will weigh the BCS request as they move forward with the county budget process.

Washington and Beaufort County water customers on the north side of the Pamlico River may potentially see some interesting changes... read more