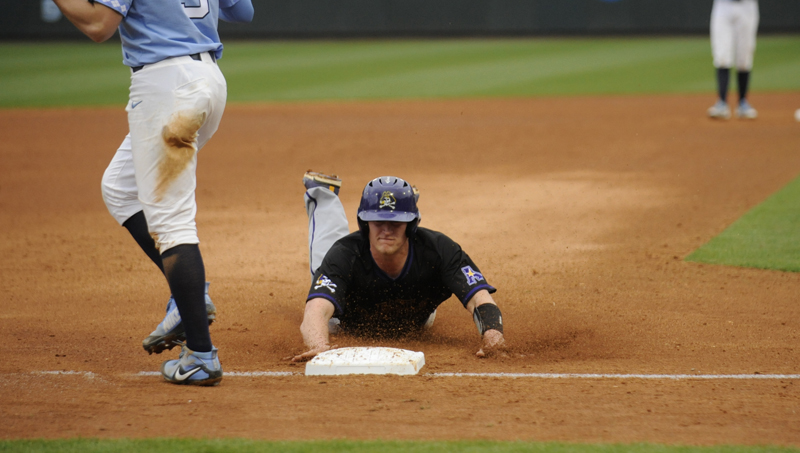 HEAD FIRST: ECU third baseman Connor Litton dives for third base in a matchup against UNC earlier in the year. (Michael Prunka|Daily News)

MEMPHIS—East Carolina picked up both games of Saturday’s double-header to earn the series sweep against the University of Memphis, winning in identical 4-2 fashion in both games. ECU improved to 14-2 in true road games this season, which ranks second nationally, and earned its eighth weekend series win of the year.

“Anytime you go on the road and get a series win is awesome and obviously sweeping a series on the road is very hard to do,” ECU head coach Cliff Godwin said.

The Pirates’ Tyler Smith pitched five innings to pick up the win in the series finale, with the outfielders’ bats doing the heavy lifting at the plate for ECU. Left fielder Bryant Packard (3-for-5), right fielder Dwanya Williams-Sutton (2-for-4) and center fielder Andrew Henrickson (2-for-4) each had an RBI and at least one run scored in the contest, with Packard leading the way with two runs scored. The trio combined for seven of ECU’s 10 total hits.

The Pirates led 2-0 after two innings, thanks in part to some sloppy defensive play from Memphis. ECU then doubled its lead in the third.

Packard, who singled earlier to extend his hitting streak to 17 games, led off the third inning by smacking an opposite-field solo home run, his tenth of the season. After the play, Memphis replaced starting pitcher Danny Denz with Hunter Smith. Denz ended up with the loss after three runs crossed the plate in his tenure.

But the Tigers’ Smith couldn’t stop the bleeding immediately. Later in the same inning, Williams-Sutton doubled down the left field line to bring Spencer Brickhouse home for ECU’s fourth and final run.

Uncharacteristically, the Pirates capped off their scoring after the third inning but were still able hold on to their lead for the entire game. ECU has often used the middle frames to put teams away this season.

Memphis added two runs in the sixth, but could not overcome the pitching of Smith, Gavin Williams, Jake Agnos and Zach Barnes. The Pirates’ Smith gave up the two runs before getting pulled with the bases loaded and no outs in the bottom of the sixth. But ECU’s bullpen did its job, giving up just two hits and striking out seven over the remaining four innings.

“I thought we played more like ourselves in game two today where guys really came out and were ready to play. We put up four runs early and then they brought in their best reliever and we couldn’t scratch any runs across,” Godwin said. “But, all our pitchers in game two were all really good out on the mound today.”

Earlier Saturday, game one of the double-header, and game two of the series, finished as a 4-2 ECU win as well. Alec Burleson got the start for the Pirates and dug a hole for ECU early, as the Tigers scored their only two runs of the game in the bottom of the first.

The Pirates used the fifth frame to score all their runs, hitting five singles, earning a walk and using a wild pitch to produce the four runs.

As the fourth batter of the inning, Packard hit an RBI single, bringing home Brown. After Lloyd hit a single to load the bases, Brickhouse hit another single, scoring Chandler Jenkins. Catcher Jake Washer followed by drawing a walk, which allowed Packard to score. Lloyd picked up the final Pirate run of the game after scoring on a wild pitch.

ECU and Memphis were evenly matched in game one of the double header. The Pirates had eight hits, while the Tigers racked up seven, and both squads left six men on base. The ECU’s big fifth inning was the difference in the game, as both teams’ bats went quiet after that point.

ECU heads to Raleigh today to face North Carolina State before returning home from its five-game road trip to face the University of Houston this weekend in a matchup of the top two teams in the AAC.