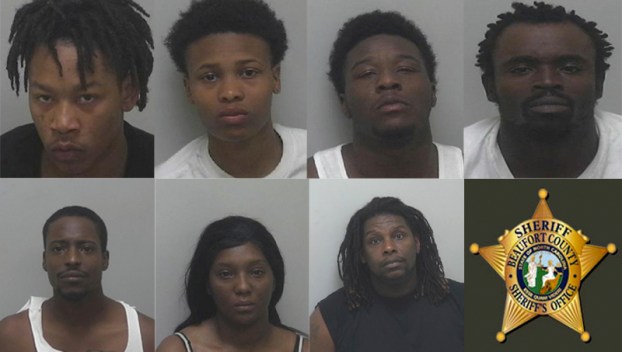 According to a press release from the BCSO, at approximately 3:40 a.m. on April 21, BCSO Deputy Tim Tetterton was on routine patrol when he spotted a suspicious vehicle parked on Swan Point Road near Riverbend Apartments in Washington.

The release states that Tetterton noticed the unoccupied vehicle was still warm to the touch. After patrolling the area and locating no one, he set up surveillance. According to the release, less than 30 minutes later Tetterton spotted the vehicle traveling west on River Road and conducted a traffic stop.

The release states that Tetterton was standing next to the vehicle during the stop when he noticed a gun on the ground near his feet. Inside the vehicle, deputies located a bag containing two stolen laptops. Both the laptops and gun were traced back to residents of Riverbend Apartments and had been stolen from two vehicles there. BCSO Lt. Jim Vanlandingham confirmed that neither of the burglarized vehicles were locked.

According to the release, the four occupants of the vehicle, Marquis Davaughn Ward, 29, Olamide Moses Wilson, 18, Isaiah Sherod Moore, 21 and Tyricka A. Riddick, 18, were arrested and charged with two counts of breaking and entering of a motor vehicle, one count of larceny after breaking and entering, two counts of possession of stolen goods and one count of larceny of a firearm. Each was held on secured bonds ranging from $50,000 to $125,000.

The release goes on to say that based on information and evidence from Tetterton’s traffic stop, BCSO investigators also were able to link Ward and Wilson to recent motor vehicle break-ins in the Rosedale subdivision during which two guns were stolen.

Washington Police and Fire Services Director Stacy Drakeford confirmed that one of the firearms stolen during that theft did belong to the WPD. Drakeford said that it is unclear whether the vehicle was locked at the time of the theft.

“The appropriate departmental disciplinary action is being taken,” Drakeford said.

According to the release, both Ward and Wilson are likely facing more felony charges based on evidence found from the two search warrants.

Using the evidence and information from the traffic stop, on the evening of April 22, BCSO deputies and WPD officers served simultaneous search warrants on residences on Van Norden Street and Grimes Road in Washington. Those search warrants yielded two more stolen guns and the arrests of Michael Anthray Davis, 30, Jolissa Danielle Moore, 29, and Conrad Demond Midgette, 43.

Drakeford confirmed that one of the firearms recovered during the execution of these warrants was the one stolen from the off-duty officer’s vehicle.

According to Vanlandingham, some of the individuals arrested may be affiliated with local gangs. In each of the thefts, he said the likely motivation is either financial gain or gaining access to weapons.

“It’s a common occurrence for a bad guy to get dropped off or rides a bicycle through a neighborhood checking car doors,” Vanlandingham said. “They do that without leaving a lot of evidence behind. He can be really quiet about doing it and walk away with whatever he can carry. It’s a difficult crime to solve.”

Vanlandingham advises the public to always lock their car doors and not leave anything of value in sight in the vehicle.

A loud sound breaks the quiet of a spring night. The dogs begin to bark. A homeowner jumps out of... read more