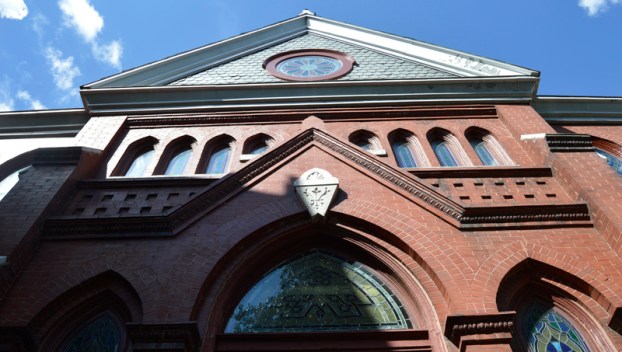 CENTENNIAL: One hundred years ago, the congregation of First United Methodist Church held its first Sunday school in the church’s education building. The facility was constructed on land coveted by the railroad, using reparation funds from the Federal government for the destruction of the original church in a fire set by Union soldiers in 1864. (Matt Debnam/Daily News)

With a deep and rich history, some of Beaufort County’s longest standing institutions are its churches. One of those churches, First United Methodist Church, celebrated a centennial milestone this past Sunday.

Celebrating the 100th anniversary of the church’s education building, the congregation enjoyed a special service marking the occasion.

“This building was added because we ran out of space,” Rev. Ken Hall said. “In the early days, like in a lot of places, the sanctuary doubled as a Sunday school complex. They decided that was something they needed to do something about.”

According to information compiled by church historian Patty Vore, 100 years ago, on April 28, 1918, the full Sunday school met in the education building’s large auditorium for the space’s inaugural worship. There were 200 people present, 16 officers and teacher, 180 students and four visitors. After the opening, the groups split into individual classes in rooms on the first and second floors of the newly christened building.

While this marked a celebratory event for the church, which had outgrown its old practice of using the sanctuary for Sunday school, 1918 was a hard year in many ways. In addition to losing members to World War I, the infamous Spanish Influenza outbreak claimed many lives that year, including the architect of the church’s sanctuary.

The construction of the education building itself was the result of two happy circumstances. The first was the purchase of a lot on the east side of the sanctuary building at the turn of the century, a piece of property the railroad wanted to build on. This would have placed tracks a mere 40 feet from the sanctuary.

The second was the church obtaining a payment of $4,500 in 1910 from the federal government as reparation for the destruction of the church in a fire set by Union soldiers in 1864.

The building had a central auditorium that was two-stories high with Sunday school rooms around the edges both upstairs and on the first floor. The building was renovated in 1949 and again in 1978 and now contains several offices, two restrooms, a parlor, a small kitchen and a choir room. While the upstairs of the building is in need or repair, the first floor serves a variety of purposes.

“We would like to see it, one day, restored to its former glory,” Hall said. “I have a tremendous sense of appreciation for those who came before.”

More improvements to old houses on Water Street may be coming. In the past three years, the Washington Historic Planning... read more