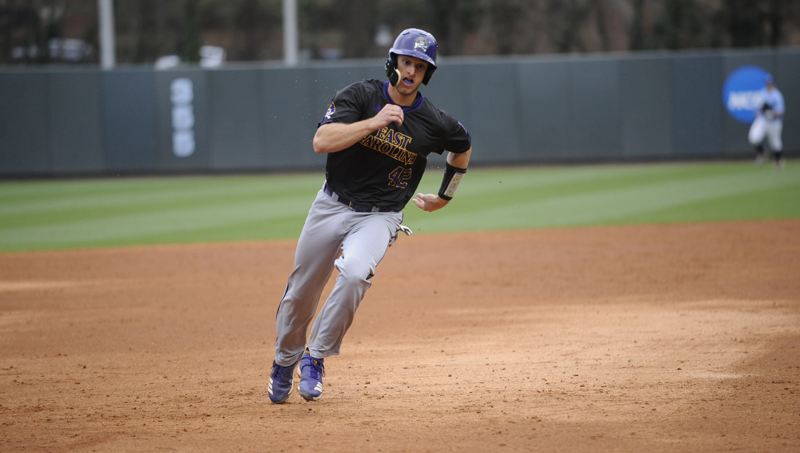 RUNNING HARD: ECU’s Spencer Brickhouse darts for third base at UNC in a game from earlier in the season. (Daily News)

STORRS, CONN — No. 9 East Carolina needed to pick up two wins during its final American Athletic Conference series of the season to eclipse the 40-win plateau, but No. 22 University of Connecticut continued its success from last season against the Pirates and played spoiler.

UConn (32-18-1, 14-10 AAC) benefited from the updated series schedule that featured a game Thursday night and a doubleheader on Friday, when it took the series 2-1. The Huskies only lost one game out of three this season against East Carolina (39-15, 14-10 AAC), much like last season, when the Pirates saw just one win and five losses against the club.

On Thursday, the Pirates scored their first run of the game on a throwing error from Husky third baseman Conor Moriarty, allowing Andrew Henrickson to score from second base in the top of the second.

The Huskies responded in the bottom of that same inning when Chris Winkel and John Toppa both hit RBI-singles. It all began when UConn’s Troy Stefanski reached base on an error by Spencer Brickhouse. Michael Woodworth then smacked a double down the left field line, putting Stefanski in scoring position at third base. Stefanski would find his way home to score on Winkel’s RBI-single. Woodworth then plated the second run for UConn two batters later, thanks to Toppa’s single. The game-winning run came in the fifth inning, this time thanks to Stefanski, who had an RBI-groundout to score Zac Susi.

ECU did pull the game within one run in the top of the seventh inning on a Jake Washer RBI-single, scoring Bryant Packard from third base. But it wasn’t enough, as UConn held on for the 3-2 win. Packard, however, did set the ECU consecutive game hitting streak record, at 32, during the series, and is currently batting .459 on the season.

The Pirates evened the series in the first game of Friday’s doubleheader, winning 6-3. Packard led off the game with a double and eventually scored when Brickhouse hit into a fielder’s choice. Later in the first, Brickhouse crossed the plate on Washer’s RBI-single. ECU carried a 2-0 lead into the fourth before doubling its score on Packard’s two-run home run. The Pirates added to its lead in the fifth when Brickhouse crossed the plate for the second time of the game on his solo blast to right field. That gave ECU a 5-0 lead.

Alec Burleson picked up the win in Friday’s game one, his fifth of the year, and Ryan Ross added his team leading sixth save.

Starting pitcher Jake Agnos took the loss for ECU in Friday’s game two, as the Pirates fell 4-2 to UConn. The sophomore pitcher gave up all four runs and seven hits to the Huskies in 4.2 innings of work.

UConn scored three runs in the bottom of the third and it was smooth sailing for the Huskies the remainder of the game, as they never trailed. All the runs UConn scored in the frame came with two outs, as five straight batters reached base safely. Toppa collected a single, Woodworth walked, and Susi, Stefanski and Isaac Feldstein added singles after that. The Pirates tried to respond, as Packard crossed home in the fourth to make it 3-1, but the Huskies scored another run in the bottom of the fifth, reestablishing their three-run lead. ECU added a garbage time run in the top of the ninth, when Brady Lloyd hit an RBI-groundout to make the score 4-2.

The series loss drops ECU into the fourth spot for the AAC tournament that begins this week. The tournament will start with a first round game between the Pirates and the fifth-place University of Central Florida tomorrow. Bids to host a NCAA Regional have yet to be determined and the chance to host a Super Regional is still a possibility for ECU, yet doubtful, as it failed to reach the 40-win mark.