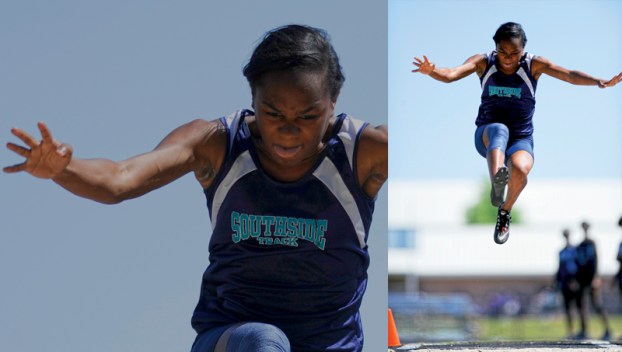 GREENSBORO — The 2018 track and field season literally could not have gone any better for the Southside girls’ 4×200-meter relay team. Jacqueline Wood, Eminey Redmond, Nytayzia Wishop and Na’keya Johnson teamed up to win every race all year long and capped their undefeated season by winning the state title at the NCHSAA 1A State Championship on Sunday at North Carolina A&T State University.

“I’m so proud of those four young ladies. They have worked hard; they have stayed together as a group the entire season,” Southside head coach Andrea Quinerly said. “Honestly, they really met no competition throughout the entire season, and we’ve gone up against some 4A schools, 3A schools and they had no competition at all. Got into the state (championship), they met up with some competition for the first time.”

Not only did the relay team face some serious competition at the state championship meet, but Wood, Redmond, Wishop and Johnson also found themselves trailing Bessemer City by a good 20 meters after two legs of the race. While Quinerly said he was confident the girls had the speed to still pull out the victory, Redmond wasn’t so self-assured.

“I thought we were going to lose, to be honest,” the senior said. “I was a little worried because (the Bessemer City sprinter) took off really fast, she was gone. But eventually when we hit the back straightaway, she kind of slowed out a little bit and so I was like, ‘just hurry up and get the baton to Jacq (Wood).’”

Despite not believing a win was possible, Redmond closed the gap with Bessemer City, giving Wood what was practically an even start with Bessemer City’s anchor. From that point, Wood, who holds the Southside school record in both the 100-meter and 200-meter sprints, pulled away from the competition to win the 4×200 state championship with a time of 1:46.09.

Winning the state title wasn’t the only success the team had on Sunday. Wood, Redmond, Wishop and Johnson also ran together for the 4×400-meter relay, taking third place at the state championship meet. Wood and Redmond also did well in their individual events. Wood placed second in the state in the 200 and fifth in the 100. Redmond, who was the defending 1A state champion in the long jump, finished in second place this year.

Also winning a medal on Sunday was the Southside boys’ 4×400-meter relay team. Jonquil Haywood, Jamison Bennett, Yahkiel White and Jaleel Coffee combined to finish with a time of 3:33.55 to take fourth place, less than a second behind first-place finisher Avery County.

The Seahawks weren’t the only Beaufort County representatives at the state championship meet. Northside’s Caroline Boyd and Caitlin Johnson also qualified to participate, competing in the 1,600-meter run and high jump, respectively.