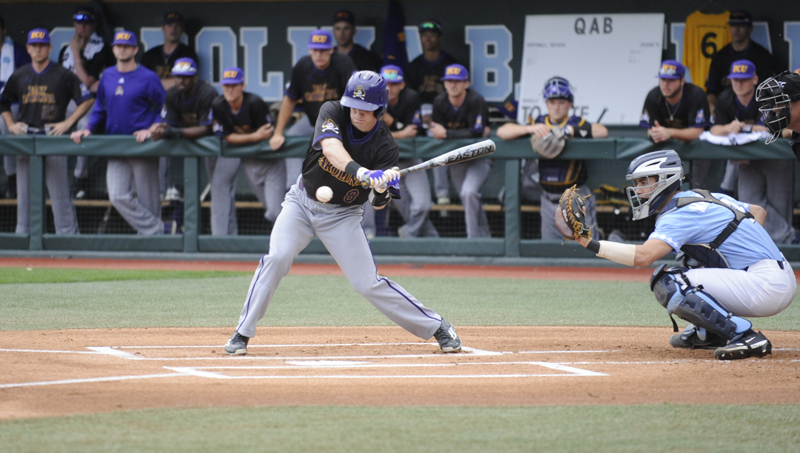 BIG LETDOWN: ECU’s Turner Brown swings at a pitch in a game against UNC from earlier in the year. Brown finished Sunday’s game 1-for-4 at the plate with two RBI, as the Pirates blew a five-run lead in their 9-7 loss to UNCW in the NCAA Greenville Regional that ended ECU's season. (Michael Prunka | Daily News)

CLEARWATER, Fla. — Down 4-1 entering the top of the eighth, No. 15 East Carolina scored five runs on five hits to take its first lead of the game in that same inning and didn’t look back, defeating Tulane 6-5 yesterday in what was both teams’ second game in the 2018 American Athletic Conference Baseball Championship tournament.

The eighth inning didn’t look to be anything different for a Pirate team that was struggling on the day so far, as Jeremy Whitehead grounded out into a 4-6-3 double play with the bases loaded. However, Andrew Henrickson crossed home plate for ECU (41-15, 14-10 AAC) and cut the deficit to two runs on the play. During the very next at-bat, Bryant Packard registered his first hit of the tournament, scoring Brady Lloyd from third to make it a one-run ball game.

ECU had found its groove at the plate, as Dwanya Williams-Sutton and Spencer Brickhouse followed by hitting back-to-back singles, with Brickhouse’s base hit scoring Packard to tie the game. Williams-Sutton scored the go-ahead run on a wild pitch from Tulane’s (25-32, 9-14 AAC) starting pitcher Kaleb Roper. The Pirates added their fifth run of the inning, and sixth of the game, on another RBI-single, this time from Jake Washer, that plated Brickhouse.

In the bottom of the eighth, the Green Wave scored a run of their own off of a wild pitch, as ECU pitcher Jake Agnos airmailed a pitch with a runner on third. Having just seen Agnos allow a run to score after throwing a wild pitch, ECU pitching coach Dan Roszel had a decision to make: whether Agnos should pitch to the Green Wave’s Grant Witherspoon.

Agnos and Roszel decided to pitch to Witherspoon. The decision to not walk Witherspoon was risky, due to the fact that the Tulane slugger had already hit a two-run home run in both the third and seventh innings. But Agnos was successful in striking out Witherspoon to end the eighth inning, after jumping out to an early 0-2 lead in the pitch count.

After an eventful eighth inning, Agnos breezed through the ninth, as he quickly retired the three Tulane batters in the bottom of the inning to end the contest. He got Trevor Jensen and Grant Mathews to strike out looking and ground out, respectively, before getting Kody Hoese to pop out.

After Witherspoon’s first two-run home run opened the scoring in the third, Henrickson hit a RBI-sacrifice fly in the fifth to score Connor Litton as an unearned run, cutting Tulane’s lead in half. Witherspoon hit his second two-run home run in the seventh, seemingly icing the game, as the Pirates only had two hits up to that point. But ECU responded in the following inning with its big rally.

Pirate pitcher Evan Volvia picked up the win on 0.2 innings of work without allowing a hit or run and striking out one Green Wave batter. Agnos earned the save on his birthday, pitching two innings and allowing one earned run on one hit and with three strikeouts. Roper took the loss for Tulane, giving up five hits, four earned runs, two walks and notching 11 strikeouts in 7.2 innings of work.

Staying in the winners bracket, ECU plays today at 12:30 p.m. The Pirates will face the winner of the game between Tulane and the University of Houston, who play today at 9 a.m. in an elimination game.