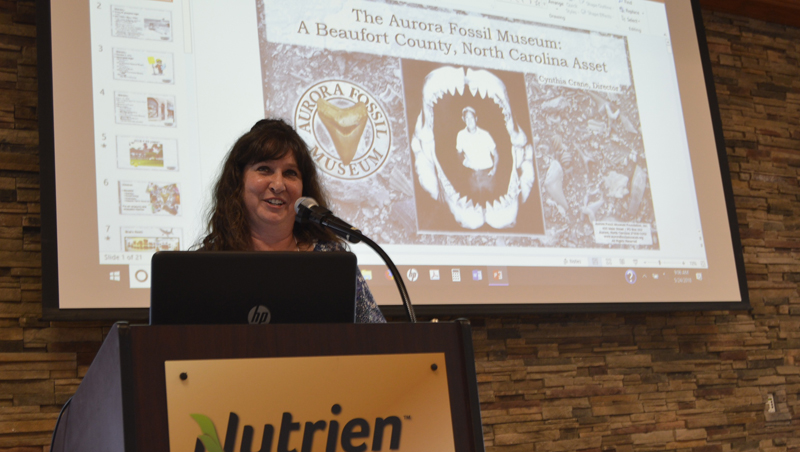 WELCOME TO AURORA: Aurora Fossil Museum Director Cynthia Crane welcomes paleontologists from across the southeast to Aurora during the 11th annual conference of the Southeastern Association of Vertebrate Paleontology. (Matt Debnam/Daily News)

Looking back across millions of years, paleontologists use fossil evidence to learn about creatures that roamed the earth in the days long before humanity emerged as the planet’s dominant species. In doing so, they offer society a better understanding of what the earth was like before we came, and the evolutionary processes that created the species we interact with today.

Yesterday and through this weekend, paleontologists from throughout the Southeast have gathered in Aurora to participate in the Southeastern Association of Vertebrate Paleontology’s 11th-annual conference. Bringing together professionals and amateur enthusiasts, the event serves as a prelude to, and an enhancement of, this weekend’s Fossil Festival.

On Thursday, the group delved into an extensive series of presentations, ranging from highly technical research findings to discussions of how to make fossils interesting for the average citizen. For Aurora, and Beaufort County as a whole, hosting the conference further solidifies the area’s reputation as one of North Carolina’s preeminent paleontological sites.

For Aurora Fossil Museum Director Cynthia Crane, bringing the conference to Aurora was a happy coincidence of attending a conference last August in Canada.

“It came up that they needed a host site for this year, and I thought, ‘Let’s do Aurora,” Crane said.

After the merger of Potash and Agrium in January, Crane was able to confirm the Nutiren Employee Center as the venue for the conference. With confirmation in hand, she began lobbying East Tennessee State University to hold the conference in Aurora.

“This is what the museum is all about, is engaging people of all different types of backgrounds,” Crane said. “A lot of the people here attending are going to tour around the area and attend the festival.”

A number of the conference’s attendees will display their work and research at the festival, adding a special touch to the event’s 25th year. Crane hopes, in turn, this will establish long-lasting relationships that will bring some of these scientists back to the Fossil Festival in years to come.

“There’s an issue with academics having trouble conveying their message, because it is too technical,” Crane said. “So a big push is outreach and being able to start learning how to talk with the public. Events like this and the festival help build that strength. It’s a way to bridge all the different people who love fossils.”

Today, the group will pay a visit to the North Carolina Estuarium before returning to Aurora for a barbecue supper and opening ceremonies for the festival tomorrow evening.