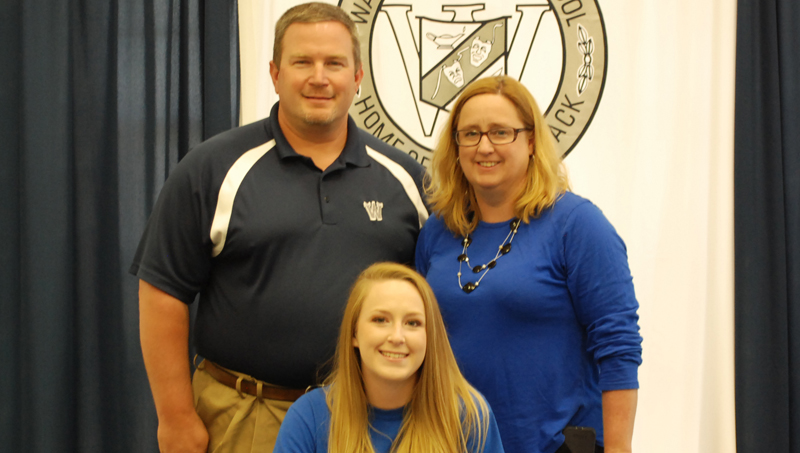 SIGNING DAY: Washington’s Mary B. Dixon signs to attend and play softball at Barton College, as her parents, Wendy and Neal Dixon, stand alongside in support. (Sean Finnerty | Daily News)

WASHINGTON — Fresh off of a 20-2 season and a run to the third round of the NCHSAA 2A softball state playoffs with the Pam Pack, Mary B. Dixon will have the opportunity to play collegiate ball, as she signed to play at Barton College yesterday.

The third baseman, who’s also shown the ability to play catcher, said she was thrilled when she found out she was getting the chance to continue her playing career.

“I was really excited,” Dixon said about receiving the offer from Barton. “I got it in an email after I went to a camp. The email came maybe three days after, so (Barton softball coach Junior Bailey) decided really quick that, I guess, I was what he was looking for. I was really excited that somebody saw what I saw in myself.”

The opportunity to play softball wasn’t the only reason Dixon, who didn’t even decide she wanted to play softball in college until late in her high school career, chose to become a Bulldog. Barton’s nursing program was a big draw for her. Dixon said the school gives her “the best of both worlds.”

“I want to go to nursing school and then hopefully move forward and go to medical school,” she said.

Washington assistant coach Brad Horton has known Dixon for a long time. He began coaching her in travel ball, for the Carolina Dirt Devils, when she eight. He said it comes as no shock that Dixon is getting the chance to continue her playing career. 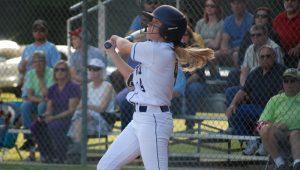 SWINGING FOR THE FENCES: Mary B. Dixon follows through with her swing in a game from earlier this season. The third baseman finished the 2018 season with a .514 batting average and 21 RBI. (Sean Finnerty | Daily News)

Horton said it wasn’t just the fact that Dixon had the playing ability, but also because she constantly put the time in to work on her hitting and fielding to improve herself.

“She’s always had that work ethic, she’s always had the drive,” Horton said. “It’s not surprising that she’s actually going to Barton to play. This is something that you could see way back when that she had the ability to do it.”

Creating a lasting bond with her new teammates, like she did with her fellow Pam Pack members, is one of the things Dixon is most eager about, as she sets to start a new chapter in her life.

“I’m looking forward to the whole college experience, leaving home, being on my own, seeing if I can handle it,” she said. “And getting to know the girls and the coach and becoming a family with them, like I’ve done the past four years with these girls here at the high school.”