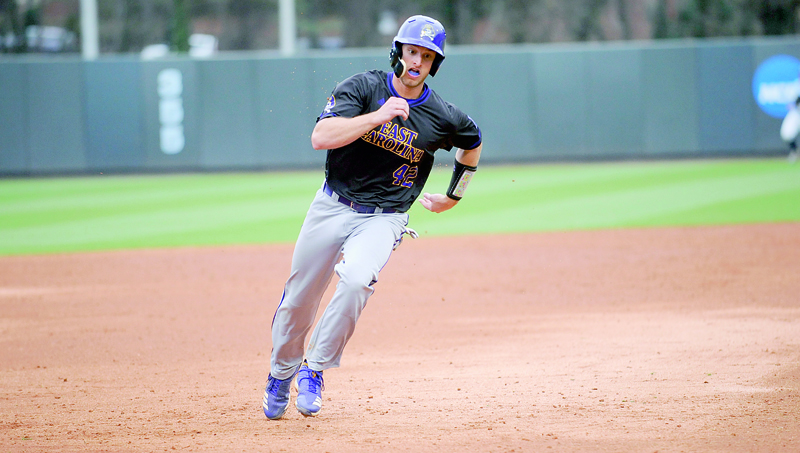 RUNNING HARD: ECU’s Spencer Brickhouse darts for third base at UNC in a game from earlier in the season. He finished yesterday’s 12-1 win over Houston 3-for-3 at the plate, with two RBI. (Michael Prunka | Daily News)

CLEARWATER, FLA. — If there was any doubt about East Carolina in the American Athletic Conference Baseball Championship tournament after a bizarre comeback win against Tulane University and the ninth-straight loss to the University of Houston on Thursday, the Pirates silenced all the chatter in their rematch against the Cougars today.

Despite ECU starting pitcher Jake Kuchmaner giving up a leadoff home run to designated hitter, and pitcher on the day, Tyler Bielamowicz, the Pirates exploited a pitching-deflated Houston in mercy rule fashion. ECU won 12-1 in seven innings to reach its second-consecutive AAC tournament championship game, and third in the last four years.

After dropping a close 5-3 contest yesterday against the Cougars that saw Houston pull away after the seventh inning, ECU knew it was close once again to finally defeating the team it had dropped its last nine games to.

Thankfully for the Pirates, the Cougars were playing their fifth game in four days and were running out of options for pitching. Houston’s lead off man got the start, but Bielamowicz lasted just 2.1 innings, giving up seven runs on just three hits. The Houston pitcher also issued five walks without recording a strikeout. The Cougars used up two more pitchers in the game, as Hunter Edwards and Dylan Lester combined to give up five runs on eight hits, while only picking up two strikeouts. Between Houston’s three pitchers, they issued 12 free passes on the day (eight walks and four hit batters).

Kuchmaner was the story for the Pirates yesterday, as the freshman pitched a complete game (7 innings) on 97 pitches. After the jitters went away after the leadoff home run, Kuchmaner shut out the Cougars the rest of the way and allowed just three more hits, while picking up five strikeouts. He is the first pitcher in ECU history to pitch a complete game in AAC tournament play, and it is the first complete game for the club since Jacob Wolfe accomplished the feat against the University of Connecticut back in 2016.

“I didn’t really think I could go seven today,” Kuchmaner said. “I just wanted to give everything I have and hope that was good enough.”

The Pirates got back into the double-digit hit column again, mustering 11, with Spencer Brickhouse and Connor Litton leading the way with three each, and Dwanya Williams-Sutton and Bryson Worrell having two apiece. Litton lead the team in RBI (3), and his three doubles in the game were the most since Eric Tyler did the same against Towson University in March of 2017. ECU is 23-2 this season when it has 10 or more hits.

Brickhouse plated the first ECU run on an infield single that allowed Andrew Henrickson to cross home plate in the bottom of the first. The Pirates added another run that inning, which ended up being the game-winner, on a wild pitch that saw Dwanya Williams-Sutton dive head first into home plate.

The Pirates will take on UConn tomorrow at 10 a.m., as they look for their 12th tournament title in program history. ECU dropped the season series against the Huskies just over a week ago, going 1-2, and is 2-7 against them over the past two seasons.