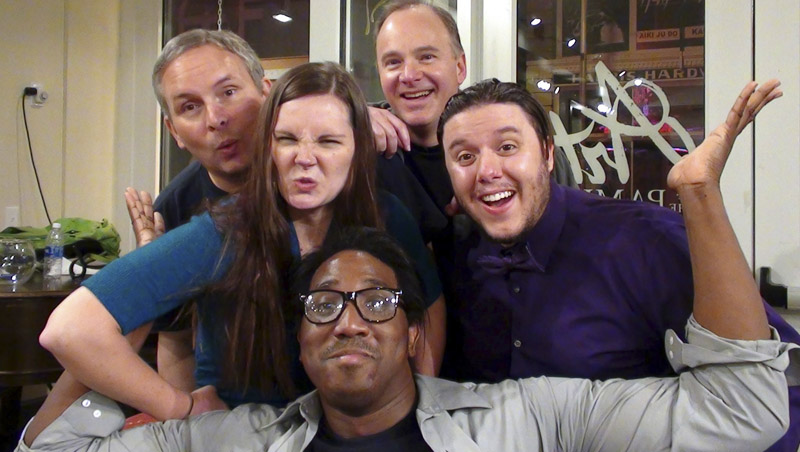 ON THE FLY: Members of I.C. Improv, the improv comedy group that has a regular performance at the Turnage Theatre, are getting set for AOP’s first Comedy Fest: two nights of comedy, along with classes for those in the market to get some of their own laughs.  (I.C. Improv)

Once a month, a stroll past the picture windows of Arts of the Pamlico’s Turnage Theatre might reveal a strange phenomena — belly-aching laughter, exaggerated antics and hijinks galore. The uproar is the work of I.C. Improv, a comedy troupe that’s leading the way to the stage for AOP’s very first comedy festival.

Comedy Fest is slated for June 8-9 at the theater. Inner Banks Improv, out of Greenville, launches the festival June 8 at 7 p.m. and will be followed by stand-up performances by Deb Aronin, YoVanna Hernandez and Kathleen McDonald. Saturday, another improv group, The Un-Intentionals, will entertain with some family friendly comedy in the Turnage gallery. That night, I.C. Improv will warm up the crowd starting at 7 p.m., followed by another slew of standup by Jon Ripley, Shari Diaz and headliner Matt White.

AOP will also host a variety of classes Saturday for those in the market for performing comedy: Improv Basics, Acting for the Camera, Sketch Comedy and Stand-up Comedy.

For I.C. Improv member and Comedy Fest organizer William White, the festival is a culmination of two years of once-a-month performances that started as an effort to create some after-hours entertainment in downtown Washington.

“It’s to get something going on downtown; it’s to get the Turnage used, and it kind of brings the comedy home, as it were,” White said, referring to the Turnage’s origins as a vaudeville theater.

Sometimes the I.C. Improv crowd is small, other times, such as in late December, the troupe’s “New Year’s Eve Eve” show, pulled a standing-room-only crowd in to the Turnage gallery.

“I think we’ve kind of touched on a niche,” White said.

That niche will be expanded with two days of comedy, both stand-up and improv — two vastly different styles of comedy, according to White.

White, a veteran improv performer, said improv actors must think on their feet, be resilient to quickly changing scenarios and be both proactive and reactive with their humor.

“With stand-up you write jokes, you practice delivery,” White said. “Improv is a lot harder than stand-up comedy.”

Part of that is because the audience is often involved, tossing out suggestions, lines and even contributing their Twitter feeds to certain skits.

“It’s always different,” White said. “You don’t know what the audience is going to say.”

White recalled one game, “Party Quirks,” in which an improv member has to act out an audience-suggested character, while the other improv members must guess the cause of the character’s quirks. On one occasion, an audience member made a character suggestion of “passive-aggressive SWAT team member,” which White called a challenge to act out, but one the audience got a kick out of.

Regardless of whether the audience prefers stand-up or improv, White said the festival is worth the $5 charge for evening performances.

“In our current world, laughter is a good thing. There’s never a shortage of things to laugh at,” White said.

For more information about the festival or the classes offered during Comedy Fest, call Arts of the Pamlico at 252-946-2504. Each class is $10 per person, per class, with the exception of the 2-hour Stand-up Comedy class, which is $20 per person. The children’s improv show Saturday afternoon is free.