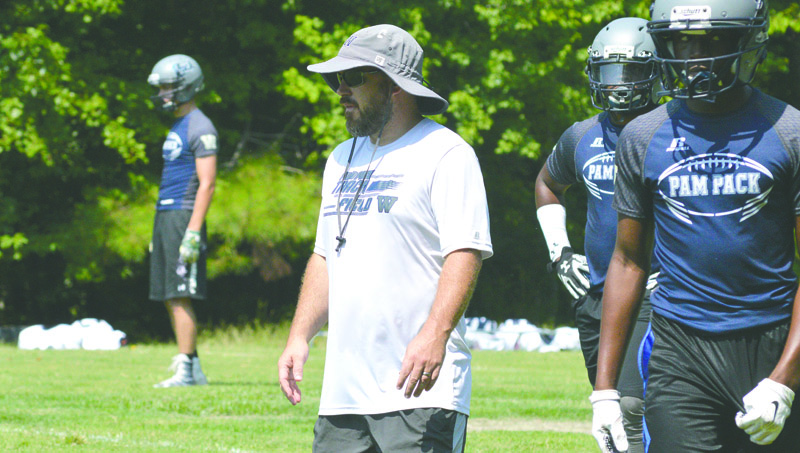 WASHINGTON — Washington earned a birth to the state playoffs in 2017 after winning three of its last five conference games. Bu the Pam Pack couldn’t capitalize on its late season surge, falling to South Granville in the first round of the playoffs.

All programs lose key players at the end of each season, and Washington was no different. Gone are Hykeem Ruffin and his 2,005 rushing yards and 29 touchdowns.

Despite losing so much ground production, expect a running-based offense. The difference is the Pam Pack believes it has four running backs it can rely upon for this upcoming season.

That’s what Washington coach Jon Blank, entering his second year as football head coach but 16th involved in the football program, sees for his team after 10 days of spring football. Here’s what he had to say about his team’s first practices in preparation for the 2018 season.

What goals the coaching staff set going into spring football:

“We wanted to get out there and set a tone for what we expect in the program. After year one, the kids were able to meet our goals for tempo and energy and all those things in practice. But at the same time we also wanted to make sure that our number one priority was installing our offense, our base defense and some of the basic things we do on special teams.”

How to replace Hykeem Ruffin’s production from last year:

“Hykeem, he carried for 2,000 yards and 30 touchdowns, the way we’re looking at next season is yards and touchdowns by association. We feel like we have four guys that can start at running back for us right now, and two guys that can start at quarterback for us, and that’s just in the varsity program. We’re feeling pretty good about the production that’s going to come back. A lot of that is going to weigh pretty heavily on Ka’Ci Foreman. He rushed for about 1,500 yards last year and that was in fairly limited time.

“I think our offensive line definitely stands out as a position group. We feel like we have one of the best offensive lines that we’ve had in a long time. But then also I feel like kids like Jahno Bryant at corner, Michael Clark in the backfield, MyKel Warren at linebacker, even some young guys like Isaac Roberson Cooper and Hayden Anderson at inside linebacker, I think a lot of those guys really set tempo and tone that we’re expecting in the program.”

What impressed him at spring football:

“I was really impressed by the energy they brought daily. It felt like a different team from a year ago. You know we’re coming off a season where we did make the playoffs and we advanced from the season before, but it felt like a completely different program. The kids have totally bought into our weightlifting and conditioning program. The kids have bought into our academics. At this point it’s really just a matter of fine-tuning what we do. At the end of the day, I think our kids know and they fully respect the idea that Washington’s going to do what Washington does. I was really impressed at how we do what Washington does.”

“Our offensive line is definitely a strength for us, having the depth in the backfield is something to look forward to. We also feel very improved at the wide receiver positions. Defensively as a group, we’re able to look at that as a whole and say it is ten times improved from a year ago because we knew that our JV defense was good and we tried to keep them together as much as we could last year. And they’ve kind of come up and done a great job as a unit. So, there are a ton of things that we’re really happy with and feel like we can hang our hats on.”