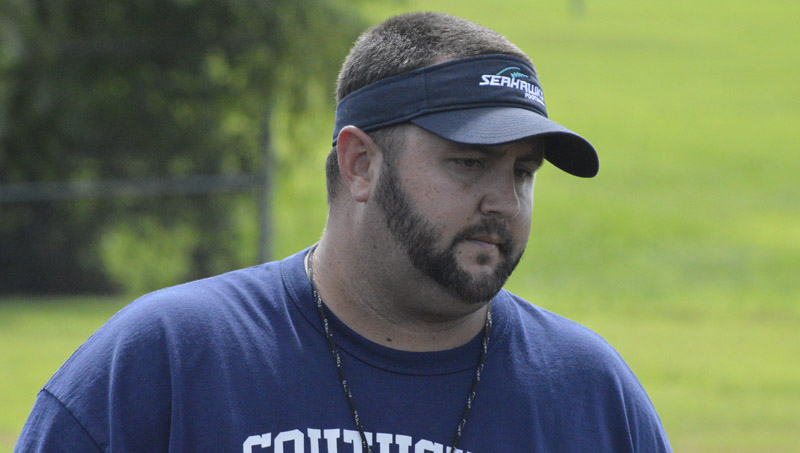 CHOCOWINITY — Despite not making a third-consecutive trip to the 1A eastern regional championship, Southside’s 2017 football season shouldn’t be considered a failure. After all, the Seahawks still made the playoffs, where they eliminated cross-county rival Northside with a 20-0 victory, before getting knocked out in the second round by a North Duplin squad that finished the year 14-1.

Roster turnover from year to year is a common theme in high school sports, and being a smaller school, Southside is getting hit particularly hard going into next year.

With the personnel changes, expect to see a different look from the Seahawks on both sides of the ball. Traditionally a wing-t offense, don’t be surprised to see Southside using the shotgun formation at times this upcoming season.

That’s the way head coach Jeff Carrow sees his team evolving after his team’s six spring workouts. Here’s what he had to say about his squad’s first practices in preparation for the 2018 season.

“Turnout was good. Our numbers will be down a little bit because we’re graduating 21 seniors, and for a small A1 school that’s a hit anyway. But our numbers, everybody who we expected that will be playing football next year, for the days that we had it, we had 95 percent of them out there, and we knew where the other 5 percent were half the time. They were making up tests or doing something academically. Numbers, as far as who we expected to be out there, we were very pleased with.”

“Our goals were basically to put in some new stuff offensively. We’re actually adjusting a little bit from the traditional wing-t. We’re going to a little bit different formation, with two splits and a little bit of shotgun stuff we’re putting in. We were able to incorporate that in, and just kind of refine some of the offensive stuff that we’re putting in.”

Why change the offense:

“Will Warren will be our projected starter. He started for us last year but Hundley Stallings is coming on strong. He’s a really hardworking young man. He’s grown quite a bit in the offseason, but he’s just soaking everything in. That’s nothing taking away from Will; he’s done a great job. (Warren) went out there during spring workouts and caught on quick to some of the new stuff we we’re putting in and was looking pretty decent with it. We’re pleased with both young men, as far as at the quarterback position there.”

“I think our offensive line, where we’re adjusting a bunch of guys and we’re putting in a little bit different blocking schemes than we’ve had in the past. And we’ve rotated quite a few guys, as far as position group I was very pleased with those guys. But as a total group, I think they did well communicating together. Skill wise, again, I think Will Warren had a really good spring workout, Jonquil Haywood and really a combination of all our backs. We’ll be rotating quite a few backs this year. Obviously, no true starters at this point but Jonquil Haywood in the backfield was a step above everybody, as he should be, being a senior. Him and Will Warren had really good spring workouts.”

Why switch things up on the defensive side:

“Again same thing as offense, it’s based off of personnel. Like I said, we don’t have as quick defensive ends as what we normally would. We’ve got more bigger guys and we’ve got skill guys so we’re switching up, going to a 3-4. But of course with coach Andrea Quinerly, he does an awesome job with it. He has multiple sets all the time anyway. But 3-4 will be our base.”

Importance of strong spring camp to set up future success:

“It’s really important right now. We’ve been stressing to our guys, with the numbers and all, that the ones that we have out there, it’s very important that we make a consistent basis for spring and the summer. Because we won’t have as much depth as we normally have. And we’re putting in new stuff, so the learning process of football this year is going to be bigger than other year in the past.”