There’s no such thing as ‘nothing to do’ 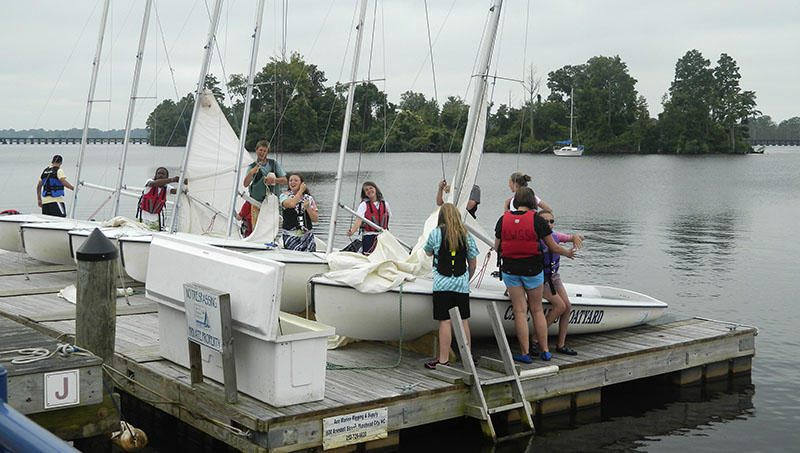 NEW SKILLS: Children prepare to take to the water during a past Little Washington Sailing School class. Learning to sail is just one of many options available to children this summer. (Daily News)

School’s soon to be out for the summer.

Many can remember the endless days of summer from childhood, the hours stretching out with “nothing to do.” So what’s the average kid got to do until he or she heads back to school in August? Turns out, there’s plenty to do here.

Once again, the City of Washington and Arts of the Pamlico have teamed up to provide a host of affordable activities and art camps for the summer. Here, children can participate in anything from skateboarding and basketball camps, to painting and pottery; from making movies, to starring in the Broadway Kids Camp production of “The Little Mermaid.”

Beaufort County Community College has also ramped up its offerings for children over the summer, ranging from cooking and cake decorating, to woodworking and classes based on science, technology, engineering and math principles. Video game design, chess and painting, along with a class exploring water quality in local waterways, are just a sample of classes available.

Brown Library is also back with its Summer Library Program and reading challenge, a combination of entertainment and activities, along with afternoon movies and prizes for achieving reading goals.

On the waterfront in Washington, soon-to-be sailors will be taking to the Pamlico River to learn the basics of sailing during weeklong Little Washington Sailing School classes. At the North Carolina Estuarium, a variety of children’s programs are being offered throughout the summer some of which take on topics near and dear to children’s hearts, such as snakes and bats, and activity days aimed at introducing kids to the wonders of the estuary.

For the sports oriented, Washington native and former Kansas City Chiefs football player Terrance Copper returns to town to host a free football camp at Kugler Field on June 16. The camp will be followed by a cookout and community gathering hosted by Washington Police and Fire Services at Havens Gardens.

These programs are aimed at keeping children entertained, of course, but they’re also keeping minds engaged; they’re educational in ways that  might not be learned at school.

This summer, there’s no such thing as “nothing to do.” Rather, it’s time to get out and do it all.