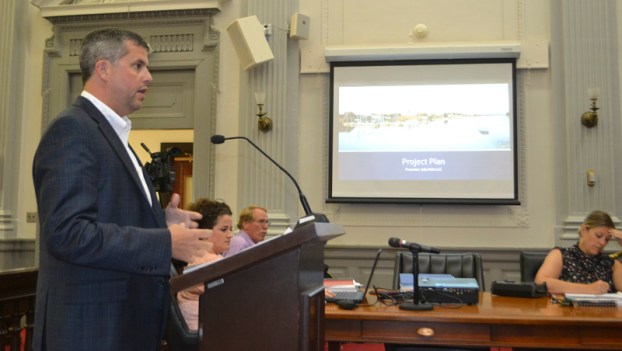 A historic downtown building is poised for reuse after renovations to it are completed.

During its meeting Tuesday, the Washington Historic Preservation Commission unanimously voted to issue a certificate of appropriateness to 183 West Main LLC to make several exterior modifications to the building. Kevin Rawls, a principal in 183 West Main LLC, explained the proposed changes and why they are needed.

“On Jan. 2, we made an offer on the old Washington Jewelry building, with a vision to transform this space into high-quality retail and waterfront living at its finest,” Rawls said. The retail space would occupy the first floor, with residential spaces on the upper floors, including three condominiums on he second floor, he noted.

Rawls said he found a tenant for the retail space last week. “Copper Canyon Wellness is going to take the entire downstairs. I’ve secured a long-term lease with Copper Canyon. They’re going to offer chiropractic massage therapy … and acupuncture. They’re very excited. You’ll see some stuff happening on that,” he said. “I want to start and finish in 2018.”

The exterior changes to the building include the following:

Commission members questioned Rawls, mostly seeking details about installing windows on the east side of the building, the second-floor balcony and windows that would replace existing decorative plywood covering where windows used to be on the building. Rawls provided those details.

“I think it’s a wonderful project. It’s really nice. It would be a nice addition to the downtown when it’s finished,” commissioner member William Kenner said.

“I think I agree with all of you guys. I think it looks like it’s going to be a very nice restoration that you’ll be able to appreciate the architecture. I applaud them for doing that — particularly saving the windows, all the details and that sort of thing,” commission member Karen Mann said.

Commissioner members said they appreciate the effort to restore the building’s front façade to its original look.

For safety reasons, the City of Washington is seeking permission from the Historic Preservation Commission to remove a damaged storage... read more