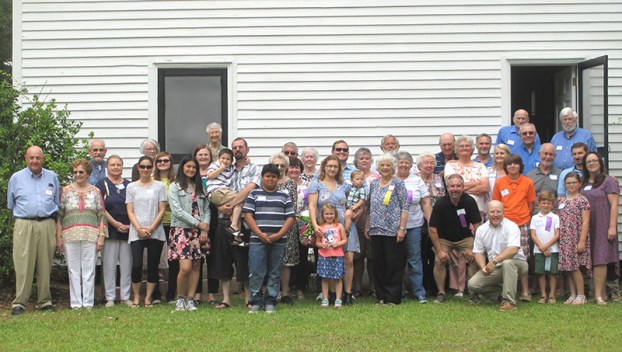 The 51st Annual Reynolds Family Reunion was held May 20 at the Bethlehem Primitive Baptist Church near Columbia, with 41 members and guests in attendance.

Family and guests began arriving at 10 a.m, and the official business meeting started at 10:35. Mark Bateman of Ledyard, CT, president, opened the meeting and welcomed everyone.  Next Mark read a poem on “Family – Once in a Lifetime” that reminds us to take the time to gather with family while we can, before time slips away from us.  This was followed by a hymn led by the president and the opening prayer by Katie Swain Reynolds Woodley of Jamesville.

Three recent family births were announced:  Carter Blair Barnes born in May 2018 to Gordon Winson Barnes Jr. and Amy Brickhouse Barnes of Winterville, and grandson of Gordon and Teresa Barnes Sr. of Grimesland; Rosalyn Virginia Voliva born in July 2017 to Michael and Kari Hohn Voliva of Ashburn, VA; and Susan Carson Davis born in March 2018 (but sadly passed away April 1) to Jordon and Stephanie Davis of Wilmington.  Both Michael and Stephanie are the grandchildren of Mrs. Virginia Voliva of Columbia.  We also celebrated the day as the birthday of Margaret Chesson Boucher of Columbia.

The minutes of the last meeting were read by the secretary Susan Reynolds Forbes of Roper, and the treasurer’s report was given by Gail Reynolds of Columbia.  Mark gave a report on the repairs to the Bethlehem church building.  The outside was painted and the interior bathrooms were both repaired.  More work is needed to repair rotted subflooring, as funds become available.

Next, a memorial service was led by the Amanda Reynolds Frymier of Plymouth for the 9 family members who died during the past year.

The program featured was “Family Stories:  Ed Reynolds, Arthur Reynolds, Clara Spencer.”  This told stories by and about these family pillars of the Reynolds and Spencer lines, that brought back memories of how life was years ago.  The Arthur Reynolds story told about his shocking first encounter with an automobile in 1909 at age 8, and it was re-enacted as a skit by different family members that played the parts of the story –- it was entertaining to all.

Joyce Bateman Giglioni was recognized as having traveled the farthest to attend, 850 miles from Starkville, MS.  The youngest member was Thomas Dale Baker, age 1-1/2, son of Steven and Katie Baker of Camden.  The oldest was Mrs. Virginia Voliva of Columbia, age 95.  Attending the reunion for the first time was Sandra “Marlene” LoNigro of Virginia Beach, VA, James and Sue Atkinson of Hope Mills, and Chesson and Darcy Boucher (children of Chuck and Selma Boucher) of Columbia.  Colorful award ribbons were presented to each of these people.

At this year’s meeting there were family members from all of the William Reynolds Jr. lines:  Mary Elizabeth, James William, Rhoda Caroline, William Puckett, and the Benjamin Reynolds lines all had family members attending.  The Matilda Jane Reynolds Spencer line was also represented.

It was noted that the annual Primitive Baptist preaching service has been moved from the 4th Sunday in September to the third Sunday –- it will be held at Bethlehem on September 16, 2018, at 10:30 a.m., led by Elder Johnny Ray Gardner.  Also noted was that the next reunion will be held on the 3rd Sunday, May 19th, 2019.

The reunion meeting adjourned at 12:10 p.m. with the blessing given by Rev. C.L. Reynolds of Columbia.  Then came a barbecue and covered-dish picnic lunch provided by the families, held outdoors in the yard of the church.  The dessert time was briefly interrupted by a surprise pop-up shower which sent everyone scurrying back into the church, but the desserts were delicious just the same!  A meeting of the Bethlehem Primitive Baptist Church Preservation Society followed the picnic.

Several projects designed to enhance safety on the Columbia High/Middle School campus are currently scheduled for this summer, Dr. Will... read more