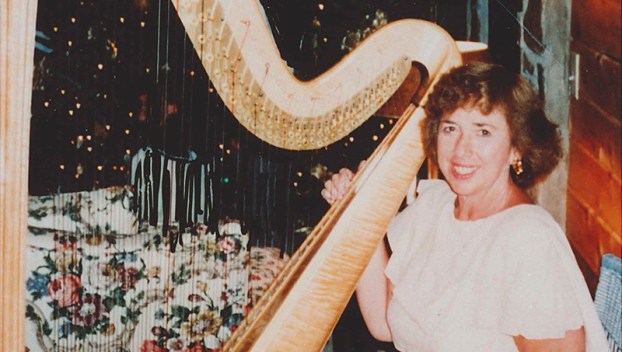 Mary Jo Hoover Lewis passed away on June 17, 2018, in Raleigh. Jo was preceded in death by her husband, Blake C. Lewis, Jr. of Washington. She was born on March 16, 1932, in Batesburg, South Carolina. She was the daughter of the late Gladys Minesh Hoover and Rufus Edward Hoover, and the youngest of nine siblings.

From the age of three, Jo was an accomplished musician, excelling in piano, organ, and later years, the concert harp. She held two music degrees, one from Wesleyan College in Georgia, and East Carolina University. In her early career, she was the on-air personality for Romper Room on WNCT- TV in Greenville, where she was known as Miss Music and later, Miss Jo. It was there she met her husband, Blake, the love of her life, whom she was married to for 41 years.

Jo taught music at Beaufort Community College and various public schools across eastern North Carolina. She enjoyed sharing her gift with many people across the state through enrichment programs and private events, including Tryon Palace and the North Carolina Governor’s Mansion. In addition, Jo was the organist for 17 years at First United Methodist Church in Washington.

A memorial service honoring Jo’s life will be held on Friday, June 22, 2018, at 11 a.m. at First United Methodist Church in Washington. The service will be officiated by the Reverend Ken Hall. The family will receive friends immediately following the service.

Condolences may be sent to the family at www.paulfuneralhome.com.

Paul Funeral Home & Crematory of Washington is honored to serve the Lewis family.