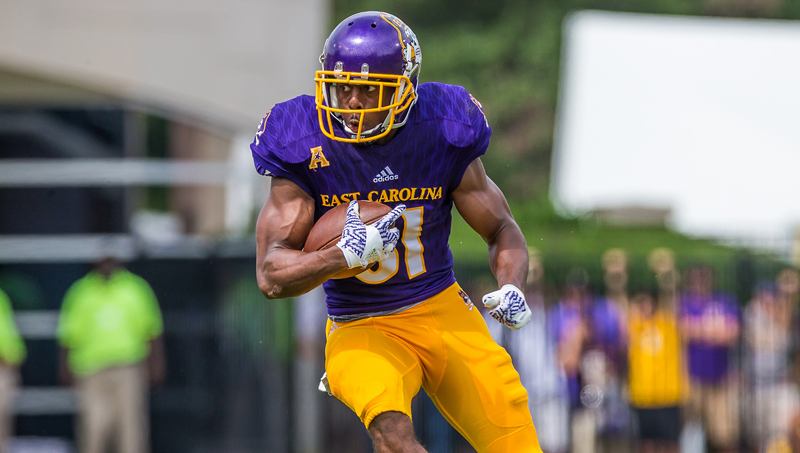 PLAYMAKER: Jimmy Williams looks to make a play after completing a catch during his time as a Pirate. After being signed by the Denver Broncos as an undrafted free agent, Williams is fighting to lock down a roster spot. (ECU Athletics Communication)

After playing his whole football career in eastern North Carolina, former East Carolina University wide receiver Jimmy Williams now finds himself running slants, curls and post routes in the shadow of the Rocky Mountains. The former Pam Pack star signed as a free agent with the Denver Broncos after not being selected in the 2018 NFL Draft the last weekend of April.

Similar to how he went from an invited walk-on at ECU to earning a scholarship as a Pirate, Williams is attempting to lock down one of Denver’s 53 roster spots. To do so, the 5-foot-11-inch wide receiver will have to simultaneously adjust to the professional game and impress in workouts and practices, a process, which started with a rookie minicamp.

According to Williams, the adjustment has gone smoothly so far.

“Things are going well, everything has been going good,” he said in a phone interview. “I feel good about the experience so far.”

After signing with the Broncos on April 28, Williams finally got his first taste of professional football on May 11, when Denver began its three-day rookie minicamp. It is meant as an orientation for players to help them adjust to being a professional and treating football as a job.

Perhaps surprisingly, two out of the three days of the rookie minicamp were spent on things other than actual football.

“The first two days were dedicated to being introduced to the league, getting information from different sources about managing everything off the field now. It is kind of different with (football being a) job. How you have to represent yourself and different things like that,” Williams said. “I got a lot of information and a lot of new ways to look at things now that I am in the NFL. That process was really fun.”

One of the biggest topics over the first two days of Williams’ first minicamp with the Broncos was money management.

“It was a lot about finances, financing, how to manage your money because a lot of people in the past haven’t really managed their money really well and it has been rookies,” he said. “You learn everything about finances, credit, things that you usually wouldn’t go over, people wouldn’t think that you’d go over because you have so much money. But learning about financially how to set yourself up, not only for now, but how to have a good retirement plan, how to save your money for things… and learning new things that you would never think you should go over just to have a good career, not only when you are playing football, but after as well.”

But once Williams and his fellow rookies went through two days of seminars, they finally got to hit the field and play some football.

One of the biggest differences from playing in college was the speed at which everyone was playing. Williams said much was the same as back at ECU, such as the types of meetings they had and how practices were run. But learning the speed of the game at the professional level was something Williams said he had to deal with.

But maybe the biggest adjustment Williams had to make was something many football fans might take for granted: huddling up for play-calls.

“I wasn’t used to that in college. We were no huddle, so it was all signals. Now you kind of got to know concept names and different things like that that you are not used to learning,” he said. “Now you got to get in the huddle and listen to a quarterback call out that play. You just kind of buzz out a little bit because you’re not used to seeing that. It is kind of tough to remember everything super fast, and then hear it, visualize it and then go out on the field and perform it. So that has been a big transition for me, just listening to huddle calls.”

Once Williams finished the rookie minicamp and was acclimated how the Broncos did things, he was ready for the organized team activities and mandatory minicamp that included the whole squad.