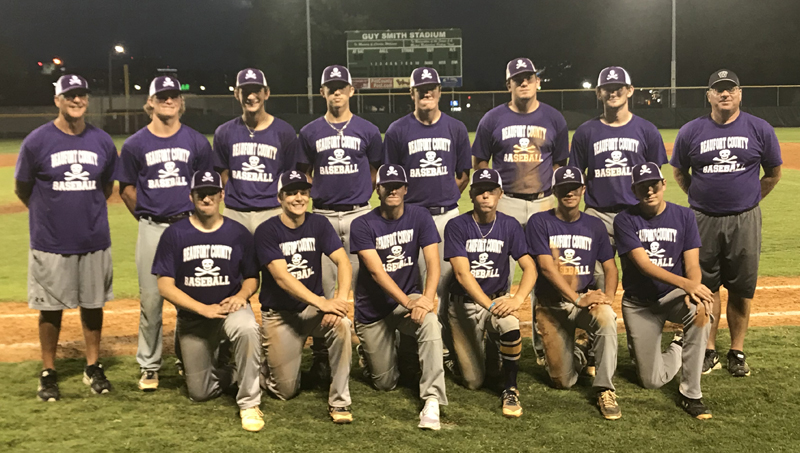 WINNING STREAK: The Beaufort County Pirates senior Babe Ruth baseball team poses for a team photo after a game this past week. The Pirates have won nine straight games after dropping its first two of the season. (Tammy Cutler)

GREENVILLE — A late outpouring of runs proved to be the difference Thursday night, as the Beaufort County senior Babe Ruth baseball team defeated Nash County 7-3 at Guy Smith Stadium to finish the regular season on a nine-game win streak.

Already leading 2-1, the Pirates blew the game open in the top of the sixth inning. The sixth began with Frederick Holscher literally taking one for the team, as he reached first base after being hit by a pitch. Brantley Cutler followed by belting a double to right-center, scoring Holscher for Cutler’s third RBI of the game. Two batters later, it was Cutler’s turn to cross home plate. Parker Boyd, who along with Cutler had a team-high two hits on Thursday, singled to score the center fielder.

Beaufort County went on to score three more runs in the inning, thanks to a combination of some base-hits, a balk and a walked batter. When the dust settled at the end of the top of the sixth, the Pirates had built a 7-1 lead.

Nash County, which entered the game in first place with only one loss, responded immediately with some runs of its own in the bottom of the sixth. A Nash County triple and a double put two more runs on the board to cut the Pirates’ lead to 7-3. But unfortunately for Nash County, that was the extent of its rally.

Beaufort County starting pitcher Chris Sulc earned the win, allowing three runs on seven hits. The former Pam Pack player struck out eight batters and issued two walks in his time on the mound. Will Warren relieved Sulc in the seventh to pick up the save. Warren faced four batters, striking out two of them.

Beaufort County wasted little time Thursday night in building a lead. Cutler, batting second in the Pirates’ lineup, blasted a two-run home run to centerfield to establish a 2-0 Beaufort County lead in the first inning. Nash County scored a run of its own in the fourth, but that was the extent of the game’s scoring until the sixth inning.

After wrapping up the regular season, Beaufort County will play in the Coastal Plains Senior Babe Ruth post-season tournament, which starts on July 8. It will be the final opportunity for many of these players to play together, as they recently graduated and are moving on after playing summer ball together for many years.