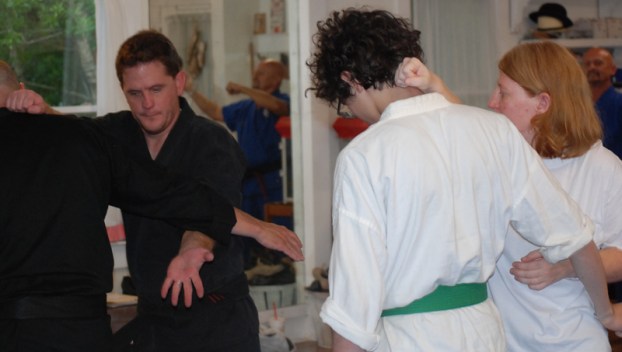 PASSING ON KNOWLEDGE: Joshua Chandler demonstrates how to properly perform a technique to some students at the Washington Karate Academy. Chandler was just promoted to Godan, or fifth-degree Black Belt, as part of the Academy’s anniversary celebration. (Sean Finnerty | Daily News)

It all began for Sensei David Warren with seeing a legend with his own eyes. As a 13-year-old, the Washington native had the opportunity to watch Bruce Lee put on a martial arts exhibition at the Turnage Theatre. The speed and precision of Lee, as well as his unique techniques, such as his famed “One-inch punch,” inspired Warren to dedicate his life to martial arts.

Now a Kudan, or ninth-degree Black Belt, Warren teaches Shita-ryu Karate at the Washington Karate Academy. This week his dojo is celebrating its 33rd anniversary.

Having taught for more than three decades, Warren can’t put an exact number on how many pupils he’s had, but he said it feels like he’s taught just about every kid in the area.

But there is one number Warren is aware of. He currently teaches three second-generation students, the children of former students of Warren.

The sensei said his former students told him how their children asked them to start learning martial arts at another dojo, but the parents insisted that if they learn Karate, that it be with Warren.

“That makes me feel very good, very fortunate, that they have that much faith in me,” Warren said. “They enjoyed it so much with me (they want their child to have the same experience.)”

Warren prides himself on honoring and teaching traditional martial arts in a modern society. He’s established an old school mentality that is based on education and focuses on confidence and self-esteem. He said with martial arts, “you have to put the time in.” That’s something he has an issue with in regard to more contemporary dojos, where students can receive a Black Belt within a year. 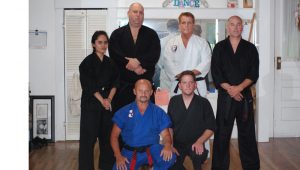 “I thought to myself ‘Wow, (Warren) trusts me enough and he feels like he’s trained me enough to give me this title,’” Chandler said.

Warren began his career in martial arts in the late-1970s, receiving instruction from Sensei Carl Miller as a 19-year-old. That’s where Warren learned the traditional method of martial arts. It was Miller who introduced Warren to Shita-ryu.

“My classmates were the highway patrol and the Washington Police Department. Imagine having them as your classmates,” Warren said with a laugh. “Back then we didn’t have sparring gloves, you just balled up your fists and we fought barefoot and fist. It was supposed to be controlled but I remember going home with bruises on my ribs each week. I look back at it now and I go, ‘I must’ve been a punching bag for these guys to practice on.’”

As Warren progressed in Shita-ryu, his love and passion for martial arts grew, and one day he decided to open a dojo of his own. During the Academy’s infancy, Warren was introduced to Sensei Charles June of Greenville. June, who specializes in a style of Karate called Goju-ryu that incorporates both hard and soft techniques, mentored Warren. Under the tutelage of Roland Rivera, Warren learned Arnis, or Filipino-based stick fighting, while also adding other forms of martial arts, like judo and weapons, to his repertoire.

Warren is quick to deflect praise to all who have helped him in his martial arts journey.

Persistence has been the key to everything for Warren, who said martial arts have given him a place in life.

Jimmy Williams has faced this type of situation before: battling for a roster spot and playing time against more heralded... read more