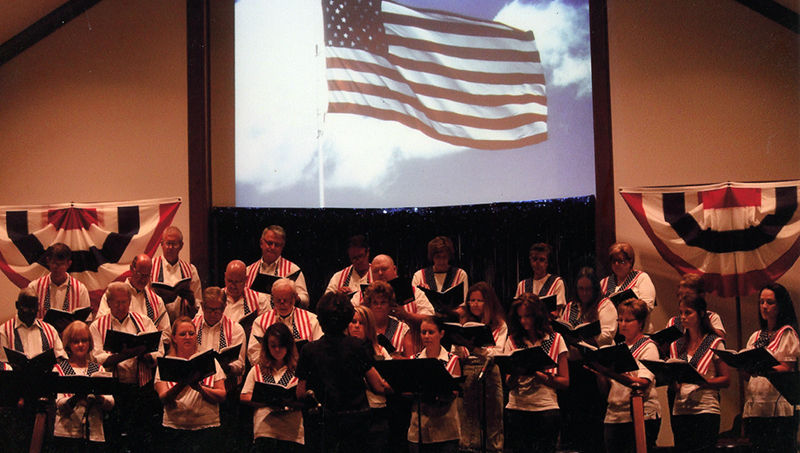 STARS AND STRIPES: Decked in red, white and blue, the choir at Chocowinity UMC performs under the direction of music director June Arnold during a previous musical. The performance blends music, patriotic imagery and the spoken word to celebrate America. (Chocowinity UMC)

CHOCOWINITY — While the fireworks and festivities of the Fourth of July will have come and gone by this weekend, the celebration of America continues at Chocowinity United Methodist Church on Saturday and Sunday, as the church’s choir and musicians present “A Story of America.”

Exploring themes such as the American Dream, the American landscape and the face of government, the program will serve as an opportunity to celebrate the United States of America and all that makes this country great.

“This year, I was thinking in terms of the story of America,” Chocowinity UMC Music Director June Arnold said. “These are big topics relating to government, the founding of America and its organization. I wanted to present these topics as little bullets to jog the mind.”

The program also includes special performance from Les Sutorius, who will perform “Il Silenzio” on trumpet, Kay Riddick, who will sing spirituals, and Wendy Dane, who will offer renditions of American folk songs on fiddle.

A special “Salute to the Armed Forces” will recognize veterans and those in active service in each branch of the United States Military. These individuals will be asked to stand and be recognized by those in attendance.

“The gift of song will help us celebrate the noble intent of our Founding Fathers, honor and appreciate those who gave the sacrifice of time, health and life to defend the future of America and determine our role in the future of America,” reads a release detailing the festivities.

For the grand finale, those in attendance will be asked to join together in song, singing “The Stars and Stripes Forever.”

The musical will be held at Chocowinity UMC beginning at 7 p.m. Saturday and 3 p.m. Sunday. Admission is free and the public is welcome to attend.

Board of Education seeks to rein in fund balance…