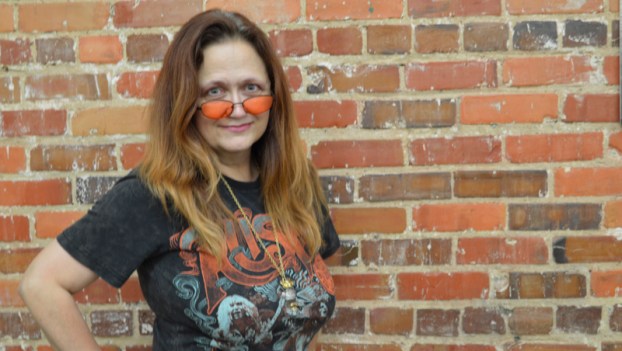 TOP VOCALIST: Local musician Nannette Garrett, half of the local group GARRETT, has been nominated in the category of top female rock vocalist in the Carolina Music Awards. Voting for the competition ends tomorrow. (Matt Debnam/Daily News)

After nearly four decades of nonstop rocking, local musician Nannette Garrett has been nominated as one of the top eight female rock ‘n’ roll vocalist in North and South Carolina.

The nomination comes as part of the 2018 Carolina Music Awards, an 11-year-old program that highlights the top names in a wide variety of genres, including rock and roll, country, bluegrass, Americana, R&B and hip hop.

“It is quite an honor to get a nomination this late in life,” Garrett said. “It gives me some hope, and I’ve always believed to never give up on my dreams.”

While results are based on open voting, which lasts through tomorrow, a panel of judges will also listen through Garrett’s discography to make a final determination.

Along with her husband William, Nanette Garrett is half of the local group GARRETT. With him on guitar and her on bass, the two blend voices in harmony, creating beautiful duets and driving rock ‘n’ roll. In addition to performing, Nannette also manages the group’s promotion, connecting with DJs worldwide and streaming services.

“We’ve gotten a lot of airplay in places like the U.K., Canada and Australia,” Garrett said. “It’s crazy where we’re getting airplay.”

Growing up in Bear Grass in the 1970s, Garrett found inspiration in female vocalists such as Ann and Nancy Wilson of Heart, Fleetwood Mac’s Stevie Nicks and Pat Benatar. When Joan Jett came on the scene during Garrett’s senior year of high school, her raw, powerful music help style Garrett’s own sound.

“It’s like I took all of those and encompassed all of them together with the rock,” Garrett said. “That’s when I first started writing songs and getting into bands, was my senior year of high school.”

At 21, she learned how to play bass, a talent that she continues to this day. While GARRETT doesn’t play live shows as often anymore, they remain active in the studio, recording new tracks with Ted Ethridge at Music Box Studio on a regular basis. With success on the air overseas, the two are also making a presence on platforms such as Spotify, ReverbNation and iTunes.

To cast a vote for Garrett for the Carolina Music Awards, visit www.awardshownow.com/cmawards. Voting ends tomorrow, and the awards ceremony will be held Aug. 11. To hear samples of GARRETT’s music, visit www.soundcloud.com/garrett-rocks or search for the band on YouTube and social media.