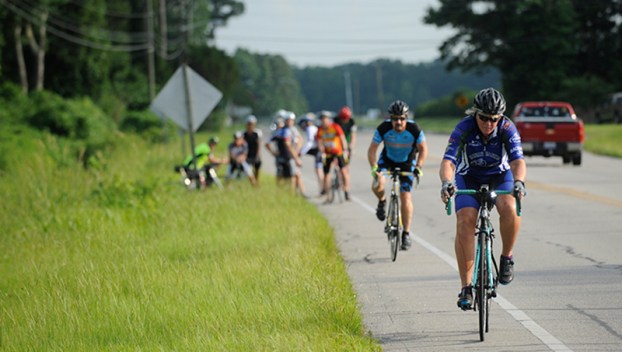 Close calls cause concern for cyclists

Take a drive around town, and you’re bound to run across them. They stand out in their colorful spandex outfits; their vehicles are just as eye-catching. Who are they? They’re moms and dads; husbands and wives; a local optometrist, a lawyer, an engineer, a biologist, the guy who worked at Lowe’s for 30 years.

They’re cyclists, and in the state of North Carolina, 30 of them were killed on roadways last year.

It’s cause for concern for this group of cyclists, 100-plus members strong, that takes to the Beaufort County roadways several times a week, where danger comes in many forms: drivers not paying attention to the road; others not understanding that the law provides the same rights and responsibilities of the road to bicyclists as it does to motor vehicle drivers.

The explanation of this, however, is in the word vehicle, according to Sgt. Scott Hammond with the North Carolina State Highway Patrol.

“Every law that refers to vehicle can apply to a bicycle,” Hammond said. “So they both (bicycle and motor vehicle) equally have the same responsibilities of obeying laws.”

It makes no difference if a vehicle is a Ford 150 or a high-end road bike. For example, cyclists must stop at stop signs and yield to the right of way. Where motor vehicles and bicycles tend to have issues is when a motorist is trying to pass a bicycle on a busy road.

What many motorists don’t understand is that since a bicycle is, by law, a vehicle, the same rules apply to passing a bicycle that apply to passing another vehicle. Just as it is illegal for a driver to pass another motor vehicle while there is oncoming traffic, it’s also illegal for a driver to pass a cyclist when there is oncoming traffic. But they do, and they do it often, according to Jill Paxson, an avid cyclist.

“Last week, I was on my way home, twice I got brushed within two miles. I was right in front of Christian Service Camp Road, and the person literally gave me an inch. I felt it on my leg,” Paxson said. “A lot of times, you know, people do it on purpose or they really, literally, are doing something else. You want to give someone the benefit of the doubt, but there’s this strange mentality, when you’re in the car, that there’s no value in the life of that person on the bicycle or the moped. … You’re helpless.” 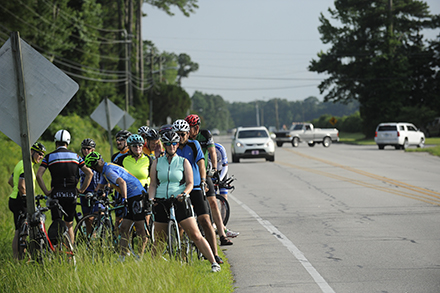 PERSONAL BEST: Time trial participants gather on Market Street Extension, just north of Springs Road, waiting for their start of the 12-mile ride to N.C. Highway 171 and back. Each participant is racing against their own personal best times. (Vail Stewart Rumley/Daily News)

Often cyclists are forced off the road at speeds of upwards of 15 mph when cars edge them over and try to pass while there is oncoming traffic. The issue has become a regular part of one cycling outing: Inner Banks Outfitters’ Time Trials on Thursday nights. The event draws 15-20 cyclists out to Market Street Extension. They’re not racing one another; they’re racing their own personal best times over the course of 12 miles, from just north of Spring Road to N.C. Highway 171 and back again. It’s a good-natured event: staggered starts allow the slowest riders to go first; the fastest riders start as much as half an hour later, but sometimes the trip is harrowing because of close brushes with passing vehicles, according to Gene Fellenger, a retired civil engineer who’s lived in Washington for 26 years, and been a cyclist for five of them.

“We have good days and bad days: good days where people are real courteous, and we have other days where it seems like people are madder than hell,” Fellenger said. “I don’t know if they’re angry — they don’t think we should be on the road. I don’t know their reasons. And it could be because they’re texting. We just don’t know.”

Other times, drivers not only cross the center line on the road, they cross the line between discourteous and criminal.

“People will literally come across the center line straight at us like they’re going to run straight into us,” Fellenger said.

Hammond, who’s ridden a bicycle on Beaufort County roads since he was a child, said he’s aware of the behavior.

“It’s unfortunate that there are deviant drivers doing that,” Hammond said. “We constantly patrol the highway, just for the safety of all motorists, but that would definitely fall into careless and reckless (driving) if one went left of center with an intentional act.”

Last week, at the request of Time Trial organizers, Highway Patrol troopers made appearances along Market Street Extension as the event occurred. As a result, no incidents of vehicles “brushing” cyclists were reported. Hammond said the next step is to engage other stakeholders and come up with a plan.

“If they’re going out as community ride, and it’s an organized and planned ride, we need to create a relationship with all law enforcement with jurisdiction in those areas,” Hammond said. “We’re gonna have to share the road. The road has to be shared by motor vehicles and cyclists.”

For Fellenger, he just wants drivers to recognize that these cyclists are just regular people trying to physically challenge themselves with a group of likeminded people — a growing community  of people who differ in age (from 20 to 80 years old), sex, background and more, but are brought together by common love of the sport.

“We’re human, too. We have families and wives and husbands and children and jobs and careers and hopes and goals. We’re not trying to be in their way and keep them from getting home. We’re just on the road like they are,” Fellenger said.