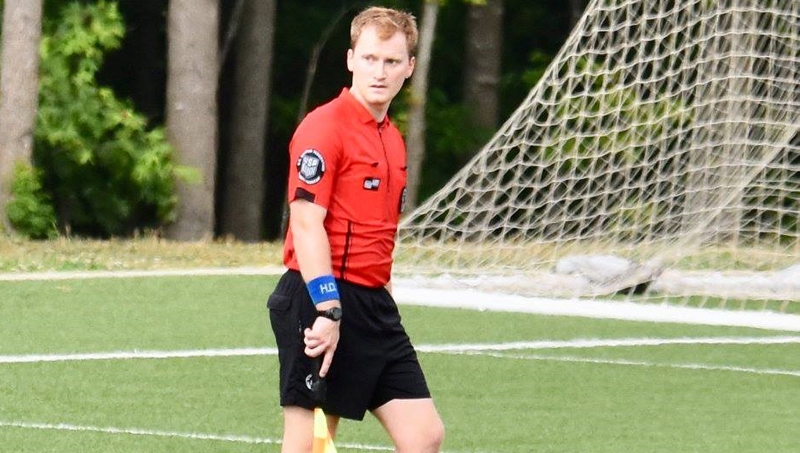 FROM OPTIMIST LEAGUE TO U.S. SOCCER: Washington native Robert Dail works as an assistant referee during the U.S. Youth Soccer Southern Regional Championships, which ran from June 22-25. Dail, who began his refereeing career with the Optimist Club of Washington’s soccer league, was honored with the Wiliam Scofield Award for his work in U.S. Youth Soccer’s Southern Region. (Robert Wertz)

Dail, a 29-year-old soccer referee from Washington, was at an annual dinner with a few hundred other referees on the eve of the U.S. Youth Soccer Southern Regional Championships in Greensboro, when they called his name as the winner of the William Scofield Award.

“The award is in memory of Bill Scofield, who was a top-level referee in the U.S.,” explained Dail. “He would always come to regionals, no matter what he was doing, to help young referees. He really took time to socialize with people from all over the region. He wanted to help develop the next group of officials. He passed away in his mid-to-late 30s.”

Since 1990, the award has been given annually to a referee in the 12-state Southern Region. Among the criteria for the award is having a “thorough dedication to the art and profession of refereeing,” and “unparalleled treatment of fellow officials with respect and friendship.”

“I was shocked when they called my name,” said Dail. “Trying to uphold those characteristics is difficult. I don’t think you are going to find anyone that has everything that Bill had, but I think we can strive to do our best to give back to the game the way Bill had.”

Dail may feel undeserving of the prestigious award, but according to Brandon Marion, a National Referee Mentor, Dail’s character and demeanor earned him the recognition.

“You take your personality onto the field,” said Marion. “Whatever background you have, whatever your upbringing is like, all your experiences come through on the soccer field, just like players. The way he lives his life definitely comes out in a positive way.”

Dail, a graduate of Appalachian State, got a job teaching at Millbrook High School in Raleigh out of college. He’s currently pursuing a degree in school administration at the University of North Carolina at Chapel Hill.

“I studied education in school, and my favorite quote was from Abraham Lincoln. ‘A man has never stood so tall when he stoops to help a child.’ I keep that in mind when I work with younger officials. I’ll get on their butts at times, but at the end of the day, I’m more than willing to stoop down and help them.”

“My best friend’s dad was the president of the Optimists and told me I should be a ref,” he said. “I was at the age where I was starting to drive, and I thought it would be a good way to make gas money.”

Every successful referee can point to a time early in their career when they realized they had what it took to do the job. Dail has a few of those instances, but one stands out.

“I was 16 and doing games with 14- and 15-year-old players,” he recalled. “My sister was playing goalkeeper, and she started laying into me. I blew the whistle, marched over and booked her. I heard my dad from the sidelines yell, ‘You’ll pay for that later.’

“I thought, ‘you know what, I don’t have to stand for that. I’m the referee and she can’t do that.’ From that point, I think I knew I wanted to continue.”

Issuing his sister a yellow card may have kept him going but his willingness to learn has kept him progressing through the ranks.

“He’s a responsible guy and he showed everyone that,” said Marion. “He takes feedback very well. We are all human and sometimes we don’t want to take feedback from peers, but he takes it and grows from it.”

Dail is now one of roughly 250 in the country to earn the status of National Referee from the National Intercollegiate Soccer Officials Association. In addition to high-level youth games, he can be found on referee crews for the Atlantic Coast Conference, the Southern Conference and other college matches.