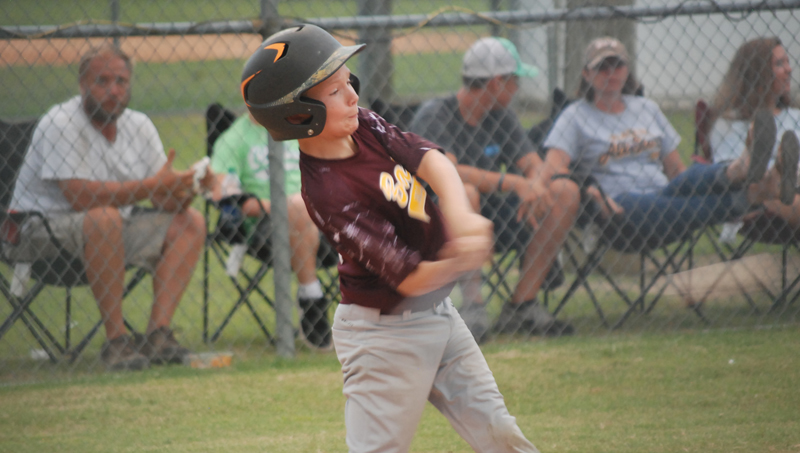 SLUGGER: Bath 10U’s Marshal Chase takes a swing during his team’s 12-1 win over Washington White 10U. Chase had an RBI-double and scored two runs in the victory. (Sean Finnerty | Daily News)

CHOCOWINITY — The Bath 10U All-Star baseball team stormed out to take a commanding lead over the Washington White 10U squad Friday night in the opening round of the Little Tar Heel League district tournament at Chocowinity Recreation Complex. And despite a delay due to rain and lightning, Bath picked up right where it left off when the game continued Saturday morning, winning 12-1.

The Bath All-Stars needed little time to get on the scoreboard, putting up three runs in the game’s opening inning. Bath’s batters got it done by showing discipline at the plate, drawing five walks. The first run was scored when Washington threw a wild pitch with the bases loaded, allowing Bath’s Will Taylor to reach home to score.

Following another walk that loaded the bases, Jaydin Bass came to the plate for Bath. Bass grounded out to the pitcher, bringing home Marshal Chase to give Bath a 2-0 lead. Bath’s third run of the inning came courtesy of a balk, giving Chase Hewitt a free ticket home.

Washington looked to immediately answer back with some runs of its own, but it fell just short. Parker Byrd drew a walk to get on base and proceeded to reach second and third, thanks to a passed ball and a wild pitch, respectively. But with Byrd threatening to reach home to cut into Bath’s lead, Bath’s starting pitcher, Hewitt, clicked into gear. He struck out two Washington batters to end the threat and the inning.

As dark clouds gathered overhead going into the second, Bath continued to pour on the runs. The combination of alert base running and timely hitting saw the Bath All-Stars increase its lead to 8-0. Avery Robinson and McKinney Waters scored the first two runs of the inning, with both reaching home after a wild pitch. After a Washington pitching change, Chase dropped a double in front of Washington’s charging left fielder, scoring Taylor. A single up the middle by Hewitt, scoring Chase, immediately followed. A Jayson Battershell bunt plated Hewitt to cap off the scoring in the second.

As Bath’s offense was rolling, Hewitt was entering a groove on the mound as well. The young pitcher opened the bottom of the second with two strikeouts, making it four consecutive strikeouts for him, going back to the first. In an attempt to get a man on base, Walt Radcliffe laid down a bunt, but he couldn’t beat the throw to first, ending the second inning.

Entering the third, the skies looked more menacing by the minute, but Bath’s All-Stars didn’t let up. A Waters sacrifice fly allowed Luke Alligood to cross home plate and Taylor followed with an RBI-single, putting Bath up 10-0. But Mother Nature decided that was enough baseball for the day, as the storm finally hit and the rest of the game was postponed until Saturday morning.

When play resumed the next day, Bath just picked up right where it left off the night prior. Adding two more runs to the scoreboard, Bath held a 12-0 lead after the top of the third inning.

It seemed like Washington would have benefitted from the game being delayed at an earlier point, as it was finally able to generate some offense when play resumed on Saturday. Washington’s Blake Wainwright singled to left field. Two passed balls later, Wainwright crossed home plate for Washington’s first score of the game, making it 12-1.

Washington finally kept Bath from adding to its lead in the fourth, thanks to Sam Boltes, who took to the mound at the beginning of the inning. Boltes struck out two Bath batters and limited Bath to a single base runner. Unfortunately for Washington, it was too little, too late. The Washington All-Stars couldn’t bring their deficit below 10 runs in the bottom of the fourth, bringing the game to a close.

Washington Blue 10U squad falls in opening round game