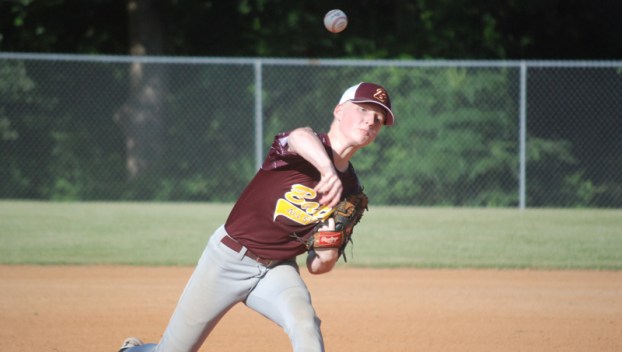 CHOCOWINITY — The Bath 12U All-Star baseball team got off to a flying start at the Tar Heel League District tournament, as a flurry of runs in the opening inning propelled Bath to an 11-1 opening game victory over West Martin on Thursday at the Chocowinity Recreation Complex.

Playing in hot and humid conditions can lead to sluggish play, but that was not the case for Bath. Its first seven batters reached base safely, as the Bath All-Stars built a 9-0 lead in the top of the first inning.

Carson Clinkscales opened the game’s scoring, blasting a ball that landed at the base of the right-field wall, good for an RBI-triple that brought Landon Modlin home to score. Mason Newman quickly followed with a sharply hit ground ball past West Martin’s second baseman to score Clinkscales.

Bo Spencer followed with a single up the middle to place runners on the corners for Bath. Outdoing teammate Clinkscales, Brandon Arthur cleared the fences with a three-RBI home run to left field, establishing a 5-0 lead for Bath.

But the Bath All-Stars weren’t finished. Leadoff man Modlin returned to the plate for a second time in the opening inning, this time with the bases loaded. For his second at-bat, Modlin dropped a single in front of the charging right fielder, scoring Charlie Dickerson. Newman closed the scoring in the inning, lacing a two-RBI double down the left-field line, giving him a game-high three RBI.

Clinkscales, Bath’s starting pitcher, made sure West Martin didn’t put on a similar display of offensive might. After opening the inning with a walk, Clinkscales struck out West Martin’s next three batters to end the opening inning. Clinkscales racked up three more strikeouts in the second inning, before being moved to shortstop in the bottom of the third.

Trying to pick up where they left off in the first, the Bath All-Stars loaded the bases in the second, thanks to a pair of walks and an infield single from Nate Battershell. But West Martin put Michael Gurganus on the mound and he got his team out of the jam with a strikeout to end the inning, keeping the score at 9-0.

Despite trailing by 11 runs, West Martin kept at it and scored a run of its own in the bottom of the third. Gabriel James reached base by drawing a walk and that’s when he got to work. First, James swiped second base to put himself in scoring position. He repeated the act by taking third base as well. The throw to third ended up sailing into the outfield, and James took advantage by running home to score for West Martin.

West Martin had an opportunity to cut into Bath’s lead in the bottom of the fourth. Three walks loaded the bases for West Martin with two outs, and it seemed like West Martin was on the verge of adding more runs. Aden O’Neal hit a ground ball that looked destined to sneak between Bath’s first and second basemen and score at least one run for West Martin. But, unfortunately for West Martin, the ground ball struck a West Martin baserunner, resulting in an out due to interference and ending the game.

Both teams play their second games of the double-elimination tournament today.