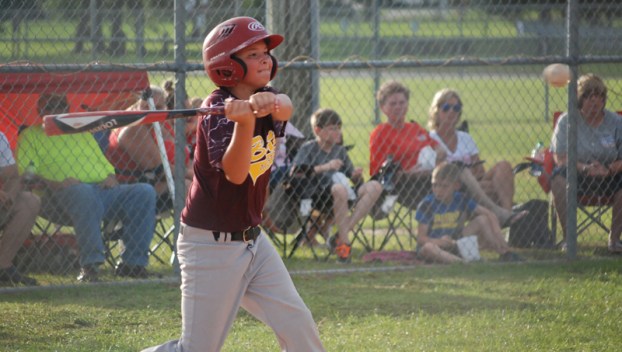 EYES ON THE BALL: Bath 12U All-Star Bo Spencer swings at an incoming pitch during Monday’s 9-5 loss against Jamesville. Trailing 9-1 in the sixth, Bath attempted a late rally but couldn’t pull off the miraculous comeback. (Sean Finnerty | Daily News)

CHOCOWINITY — With their backs against the wall in the sixth and final inning, the Bath 12U All-Stars attempted to battle back from an eight-run deficit, but their dramatic rally fell short, as they lost 9-5 to Jamesville on Monday to end their run in the Tar Heel League District Tournament one win short of the final.

With Jamesville leading Bath 9-1 after five innings of play, Bath’s final turn at bat seemed like a mere formality. But the Bath All-Stars didn’t see it that way. Still holding on to hope, Bath pushed Jamesville to the very end and caused the Jamesville supporters in attendance to grow nervous.

Andrew Harding started off Bath’s rally attempt by drawing a walk. The center fielder quickly stole second base to put himself in scoring position and moved to third after a wild pitch. Now back at the top of the batting order, Landon Modlin and Carson Clinkscales drew walks to load the bases for Bath with only one out.

With the crowd now buzzing with the anticipation of a potential comeback in the works, Mason Newman did his part with a base hit to center field. Two runs came home to score, with the second runner, Modlin, just beating the tag at the plate, and Newman advancing to second on the throw home.

Now trailing 9-3 and with runners on second and third, Bo Spencer came up with another big hit for Bath. He reached first on an infield single, just beating the throw, allowing Clinkscales and Newman to score, with Newman sliding into home to avoid the tag.

At this point, with Bath trailing 9-5, the Bath dugout and its fans in the bleachers were rocking with excitement. The energy level grew even more, as a walked batter and a wild pitch placed Bath runners on second and third with a solitary out. But just when it seemed like Bath was on the verge of pulling off the epic rally, a ground ball to the pitcher and a strikeout brought that dream to an end.

What helped Jamesville establish an 8-1 lead going into the final inning was an extremely fast start to the game. Jamesville flexed its muscle early on, hitting three-consecutive home runs in the first inning. Brayden Taylor started off the fireworks with a solo shot over the left field wall, followed by Carson Winstead and Noah Cottle, who hit back-to-back bombs to centerfield. That gave Jamesville a 3-1 lead after Modlin crossed home plate after drawing a walk and stealing second in the top of the first.

In Jamesville’s second time up to bat, it picked up right where it left off in the first, using a combination of four hits and a couple of walks to add four more runs to the scoreboard. Adler Swearingen led off the inning with a base hit and advanced to second with the help of a balk. Bobby Gardner followed by driving a ball to center field for an RBI-single, scoring Swearingen. Another balk put Gardner in scoring position at second base and Noah Pritchett reached first on an infield single. Two consecutive walks then saw Gardner walked home. The inning’s scoring was capped with a Taylor single that brought in two runs, giving Jamesville a 7-1 lead after two innings.

Monday’s loss was Bath’s second of the double-elimination tournament, ending the Bath All-Stars’ run one game away from playing for the district title.

CHOCOWINITY — With their backs against the wall in the sixth and final inning, the Bath 12U All-Stars attempted to... read more