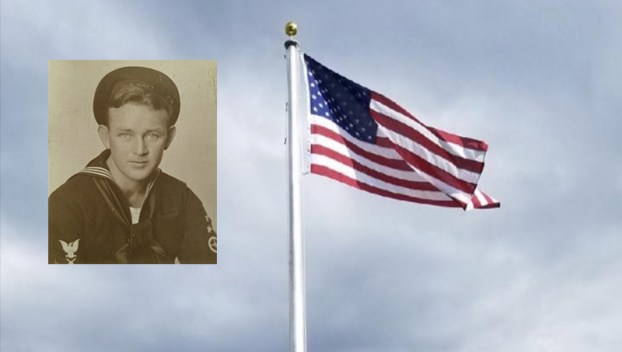 AN EXTRAORDINARY LIFE: Washington native Thomas Windley witnessed firsthand the Great Depression, Pearl Harbor and life in the Army and Navy during WWII. He was also a devoted Christian. His example was strongly felt at a family-and-friends Independence Day celebration earlier this month. (Heather Hudson)

Washington native lived through moments that defined the 20th century

“I’d been wanting a flagpole to put in our yard here,” said Daniel Hudson. “I wanted to dedicate it to something special. I decided I was gonna dedicate to Mr. Tommy.”

His wife’s grandfather, who worked as a farmhand in the Great Depression, was aboard the USS Honolulu at Pearl Harbor and served both in the Army and Navy during World War II.

Thomas Windley was born in Washington in 1917, a year before the end of the First World War. His mother died when he was only 14 and his father consequently became an alcoholic. In the midst of the Great Depression, the younger Windley and his four siblings were sent to live with foster families. He found himself on N.C. Highway 32, close to Plymouth, working on a farm.

After deciding he was discontent with it, one “bitter, cold” morning in December he packed his bags and hitchhiked to Norfolk, Va. to enlist in the Army.

“He wanted more out of life than he was getting at the farm,” said Hudson.

Windley served in the Army for five years, then joining the Navy. The USS Honolulu, a light cruiser he worked on in 1941, happened to be moored at Pearl Harbor on Dec. 7, 1941, “a day that will live in infamy.” It was one of eight ships attacked by the Japanese in the bombing that formally launched the U.S. into WWII.

The Honolulu suffered hull damage and Windley survived. The ship was repaired and put back to service.

“He didn’t ever talk about Pearl Harbor very much,” said Hudson. “It was just so tragic. Those were stories he didn’t really tell.”

On a trip back home two years later, Windley met Salathiel Ratcliff, whom he proposed to two weeks after meeting her.

“He said that was who he wanted to spend his life with,” said Hudson.

They were married the next 65 years and had six children together.

Windley served in the Navy till 1947. When he returned to North Carolina he worked at lumber company Weyerhaeuser as a heavy equipment operator. By the time he retired in 1983, he’d worked as the manager of a logging compound. In his free time he was known to work on farm equipment for poorer people in the area for “little to no charge,” said Hudson.

“He was just a genuinely good person,” he said. “He was a devoted Christian, and you wouldn’t be around him long without him talking about the Lord,” which was why he was a deacon and Sunday school teacher at his church.

Windley died in June 2008, but for the 40 people at the Hudsons’ Independence Day memorial, his example was still heartfelt. Aside from hotdogs and hamburgers and other staples of the Fourth, “it was very special to us,” said Hudson. There were discussions of what it means to be an American. Even the kids at the event seemed to take something from it, he said.

“I don’t think there was a dry eye there,” he said.

How a garden can weather the weather

Long, hot days, where the temperature soars into the 90s; no clouds on the horizon promise to break the heat... read more