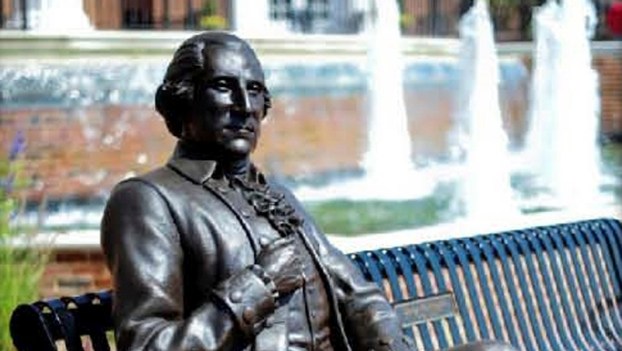 George Washington never slept in Washington, but a statue of him could sit on a bench somewhere on the city’s waterfront.

During its July 9 meeting, Washington’s City Council decided to again explore the possibility of erecting a statue of the city’s namesake if the price is right. Last year, the city looked at that possibility, eventually deciding not to use part of a $50,000 grant the city received for downtown redevelopment on buying and installing a sculpture (probably bronze) of George Washington seated on a park bench in the city’s downtown area.

That decision by consensus was made during the City Council’s Sept. 11, 2017, meeting, when the council voted to accept the grant and allocate $40,000 for the city’s façade-grant program, with emphasis on the rear facades of buildings that can be seen from Stewart Parkway and the waterfront, and $10,000 for landscaping.

At the council’s meeting last week, Mayor Mac Hodges said he showed Ted Clayton, welding instructor at Beaufort County Community College, a photo of a George Washington statue sitting on a bench. Clayton indicated students in BCCC’s welding program could attach a statue of Washington to a bench, Hodges said.

“They do quality work. All you’d have to pay for with him is materials. He said it would probably cost less than $3,000. … He couldn’t see why it would be anymore than that. … There’ a place in Rocky Mount that dips them in bronze, if you wanted to bronze it,” Hodges said. “He thought it was about $500, in that neighborhood. … I think it would make a great tourist attraction.”

Locating the statue and bench in an area that provides a view of the Pamlico River would allow visitors and others to have photographic opportunities with a likeness of one of the nation’s most historic figures, Hodges explained.

Councilman Doug Mercer suggested the city obtain from Clayton a detailed estimate of the cost of the potential project. “If he’ll give us a more detailed estimate than his conversation with you — (he) thinks it’s going to be so and so. Let him go ahead and figure the price of his materials and give us an estimate,” Mercer said.

SCOUTS AT WORK: As a way of giving back to First Christian Church for hosting the meetings of Boy Scout... read more